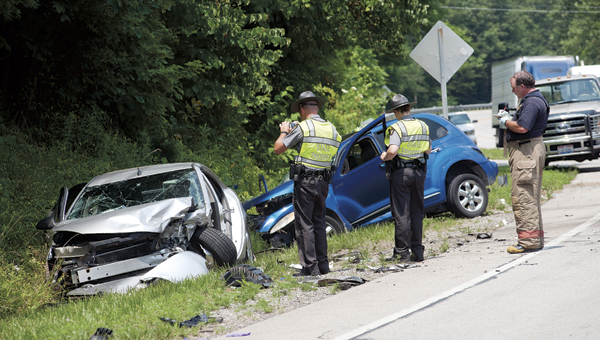 Troopers from the Ohio State Patrol and members of the Ironton Fire Department, along with Upper and Coal Grove fire departments, were on scene of a two vehicle head on collision Wednesday.

UPPER TOWNSHIP — One person was life-flighted and two others taken to a local hospital following a two-car collision on State Route 93.

The accident happened just before 2 p.m. Wednesday near the two-mile marker.

According to the Ohio State Highway Patrol, Danielle Hutchinson, 26, of South Point, was driving northbound on State Route 93 when she lost control and went left of center, hitting a southbound-traveling vehicle head-on.

Sgt. Chris Smith said at the scene that witnesses saw Hutchinson’s vehicle hit the other vehicle, driven by Robert Sturgill, 38 of Pedro. Nicole Sturgill, 34, also of Pedro, was a passenger in that car.

The Sturgills were taken to Our Lady of Bellefonte Hospital in Russell, Ky. Their condition was not immediately available.

OSHP said Hutchinson was cited for failure to control.

The half-mile section of road was closed for several hours while emergency crews from the Ironton Fire Department, Coal Grove and Upper volunteer fire departments, Lawrence County EMS and OSHP cleared the area.

An Ironton woman arrested last week in connection with the shooting death of an Elizabeth Township man was indicted... read more