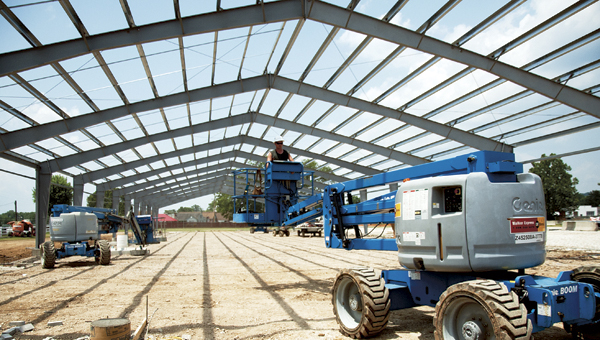 Employees from STI, Success Technology Inc. out of Columbus, work on the new fair barn Thursday afternoon. With temperatures in the 90’s crews will be working through the night instead of during the day.

Last month the county’s investment advisory board approved the county’s purchase of $700,000 in bonds that the Lawrence County Fair Board hopes to issue. The fair board bonds would be repaid over a 10-year period with the county receiving 2.15 annual rate.

That money would be used to pay for the struggling fair barn project.

Although the advisory committee approved buying fair board bonds, the final decision rests with County Treasurer Stephen Burcham, who is currently reviewing the pledges to the project.

“I have spoken to one of the people (who made a pledge) and plan on speaking to others who have pledged significant amounts and where they stand on them,” Burcham said.

Buying the bonds issued by townships or school districts has been the focus of the Neighborhood Investment Program whose mission is to increase the amount of interest the county receives from its investment over the rates offered by banks.

So far Burcham estimates projected interest from investments will be $40,000 more in 2013 because of the program.

Earlier this year the county, acting as the fair board’s fiscal agent, borrowed $400,000 from PNC Bank at 2.99 percent a year interest rate over a 10-year period. That money was to pay for building a new livestock barn and arena at the fairgrounds. The fair board will take $400,000 from the bond issuance to pay back the county’s entire obligation to PNC.

The barn project was begun last July when pledges totaling $400,000 were secured. The pledges are to be paid over a five-year period. The fair board’s goal was to have the barn ready by this summer’s fair in July with construction to have started on Feb. 1.

However that date has been repeatedly pushed back. The original contractor said he could not start without the required permits, which he and the barn contract said was the responsibility of the fair board.

The fair board terminated that contract on the grounds that the contractor received money for work that it said hadn’t been done. Both parties have threatened to sue.

Also the fair board is waiting for approval on the bond issuance from bond counsel.

Recently the fair board hired a new contractor and is projecting that the barn will be ready in time for the fair that starts July 8.

At its Thursday monthly meeting the investment committee gave its approval to a request by Perry Township that the county buy $175,000 in bonds so the township can purchase fire equipment.

The blaze ignited Thursday afternoon just after 2:30 p.m. There has been no determination yet as to what caused the... read more