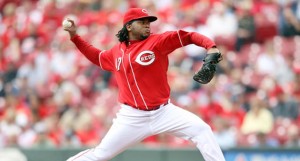 CINCINNATI (AP) — A season-high four straight losses had jeopardized the Cincinnati Reds’ lead in the NL Central and left them a little frustrated.

Worried? Not with Johnny Cueto up next.

Cueto remained unbeaten in June by pitching seven innings and driving in a pair of runs with a squeeze bunt and a bases-loaded groundout on Saturday, leading the Reds to a slump-breaking 6-0 victory over the Minnesota Twins.

Cueto (9-3) allowed three hits and fanned a season-high nine while improving to 4-0 in four June starts. The right-hander has allowed only five runs for a 1.47 ERA on the month.

Three of those four wins have ended short losing streaks.

Brandon Phillips hit a two-run homer off left-hander Brian Duensing (1-3), an injury fill-in for the rotation. Scott Rolen had two more hits and scored on Cueto’s squeeze bunt and groundout.

“We have incredible confidence in Johnny every time he touches the ball,” Rolen said. “What I really liked, though, was even though we lost four games, I didn’t notice anybody thinking we were really struggling or in a dire position of needing a win.”

Before the game, the Reds welcomed first basemen Dan Driessen and Sean Casey to their Hall of Fame before the game, with other former Reds stars joining them on the field. Cueto was warming up while the crowd reveled in the franchise’s former stars.

“I had a little bit more energy from seeing all of those people on the field,” Cueto said, with a trainer interpreting. “It pumped me up a little bit.”

Twins manager Ron Gardenhire watched the ceremony from the dugout, then chatted with former Reds shortstop Dave Concepcion, who was his favorite player when he was growing up.

Phillips got the Reds started with — what else? — a home run. His two-run shot in the fourth off Duensing made it 61 consecutive games with at least one homer at Great American Ball Park, the longest active streak in the majors. It was the 96th homer allowed by the Twins, most in the majors.

Duensing made his first start since last Sept. 24. He’ll get a chance to stay in the rotation for a while. The left-hander had no problems in the first three innings, then came apart in the fourth.

After Phillips hit his 10th homer off the batter’s eye, Jay Bruce singled and came around on Rolen’s double to right. Rolen continued to third on the play, which ended Duensing’s outing at 63 pitches. Rolen scored on Cueto’s squeeze bunt to reliever Anthony Swarzak, who could have gotten Rolen in a rundown but never looked at him. Instead, he threw to first for the out as Rolen scored for a 4-0 lead.

The third baseman and pitcher got another run across in the sixth, when the Reds loaded the bases on Rolen’s single, Scott Frazier’s double and an intentional walk to catcher Ryan Hanigan with one out. Swinging away this time, Cueto grounded out to drive in Rolen.

The 37-year-old third baseman missed 34 games on the disabled list with a sore left shoulder. In five games since his return, Rolen has gone 7 for 18 with three multihit games.

Twins closer Matt Capps pitched the eighth inning, his first appearance since June 15 because of a sore pitching shoulder. He gave up an unearned run on a double, a walk and third baseman Trevor Plouffe’s error, throwing 23 pitches.

“Still feeling it a little bit in there, but for the most part, I’m pretty happy with the way I threw the ball,” Capps said. “Better than I expected. The delivery was a little rusty maybe, but all in all, I’m pretty pleased with that.”

NOTES: The Twins are 8-9 in interleague play. The Reds are 7-7. … The game drew the Reds’ sixth sellout crowd of the season. … Umpire Mark Lollo filled in for Jerry Layne, who was hit on the side of his head by a broken bat on Friday night. Tests found no significant injury, but Layne will miss the rest of the series. … Twins C Ryan Doumit extended his hitting streak to six games. He had four hits in the series opener. … C Joe Mauer played first base. He was out of the lineup the last four games with a bruised thigh.

By JOE KAY AP Sports Writer   CINCINNATI — As a backup first baseman in the 1970s, Dan Driessen was... read more