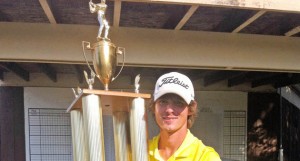 Ironton’s Nathan Kerns won the Mid-Ohio Amateur Golf Tournament on Sunday. Kerns had a two-day 132 total, the second lowest score in 48-year history of the tournament. Kerns will be senior on the Marshall Thundering Herd team next fall. (The Ironton Tribune / Photo Submitted)

WEST LAFAYETTE — Nathan Kerns wasn’t sure he wanted to play in the 48th annual Mid-Ohio Golf Association Invitational this past weekend.

When the tournament had ended, the other golfers probably wished he hadn’t.

Kerns first attempt proved to be successful as he won the MOGA Invitational at Hickory Flats Golf Course.

“I’ll probably go back next year and play. You can play in (the tournament) as many times you want to. This is the first year I’ve played in it,” said Kerns.

“(Marshall) coach (Joe) Feaganes is friends with the tournament director and they’ve been trying to get some of our players in the tournament for years. I finally took him up on it and I’m glad I did.”

Kerns shot a 6-under 66 each day for a 132 total, the second lowest score in the 48-year history of the tournament.

Zach Sebert of Grove City shot a 128 in 2007 for the tournament’s lowest score.

“I was very pleased with a 66 today. Obviously there’s more pressure when you sleep on the lead. I just wanted to play a solid round and let the rest work out. I know my hard work is paying off,” said Kerns.

After shooting a 35 on the front nine Sunday, Kerns shot a 5-under 31 on the back nine that included five birdies. He had only one bogey on Saturday and none on Sunday.

“I felt I had control of the golf ball both days and how I was hitting it. When I did miss, my short game helped me out the first day and it came around late when I need a birdie today,” said Kerns.

On Saturday, Kerns and Phillips each shot a 66 to share a one-shot lead. Kerns said he only focused on his own game on Sunday.

“I knew Charlie was playing well but I never really started worrying about his score until 16 or 17,” said Kerns.

“I thought I was up one but I was up two. I didn’t want to play match play with the final group. I just wanted to play the golf course.”

Kerns can put the MOGA trophy on the shelf next to his other awards that include the 2009 Ohio Golf Association Junior Amateur Championship, Marshall team MVP as a sophomore, Ohio high school state qualifier three times including a seventh place finish in 2008, two-time Southeast District Player of the Year, three-time All-SEOAL first team and league Player of the Year in 2007.

“This one is up there. There were a lot of good players. There were 22 scores under par the first day. I know a lot of the guys and they’re Division I golfers or going to play at that level. Golf in Ohio is good and I knew it was a really good field. I feel fortunate to come out with a win,” Kerns said.

The tournament is limited to 102 players on an invitation basis. A total of 99 golfers participated in the tournament.

Chapman blows another save chance as Reds lose 4-3

CINCINNATI (AP) — Aroldis Chapman got another chance, and gave it away. The shaky Reds closer was tagged by Josh... read more