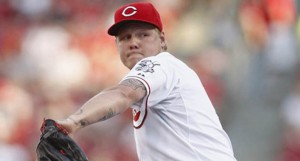 Cincinnati pitcher Mat Latos pitched a four-hit complete game and struck out a personal-best 13 as the Reds beat the Milwaukee Brewers 3-1. (The Ironton Tribune / Courtesy of the Cincinnati Reds)

Latos fanned a personal-best 13 batters in his second career complete game on Monday night, dominating the Milwaukee Brewers for a 3-1 victory that left no doubt about the game’s biggest star.

“He was awesome,” said right fielder Jay Bruce, who doubled home a pair of runs. “He really didn’t need us. He got a couple of hits, he pitched a great game.

“We knew it was in there. It was great to see him pull it out to get the win.”

The NL Central leaders won for only the second time in seven games. The Brewers, who won the division last year, have dropped eight of 13, falling 7 1/2 games back — one shy of their season high.

Latos (6-2) gave up four hits, including a drive by Norichika Aoki that made it 63 straight games at Great American Ball Park with at least one homer. Latos also singled twice, matching a career high.

He finished it off by fanning Rickie Weeks with his 109th pitch. An astounding 80 of his pitches were strikes.

It was his first eye-opening performance since the Reds got him from San Diego in their biggest offseason trade.

“It’s an amazing feeling to finally do something good after the trade,” said Latos, who has had some good moments but not quite like the latest.

Bruce doubled home two runs in the fourth off Yovani Gallardo (6-6), who allowed four hits over six innings. Brandon Phillips had an RBI double in the eighth.

Aoki led off the sixth with his fourth homer. The 63 games with a homer at Great American is the longest active streak in the majors and the longest since Philadelphia’s Citizens Bank Park also had a 63-game homer streak from 2007-08, according to STATS LLC.

The next-longest such streak? Coors Field had 80 straight games with a homer from 2002-03, according to STATS.

The Brewers saw the series as a chance to get back into the race before the All-Star break. Mostly, they needed to stop self-destructing with sloppy play that has been their norm lately.

Milwaukee has scored one run or less in three of its last four games.

The Reds got back to full strength with their starting lineup when they activated center fielder Drew Stubbs from the disabled list before the game. He had been sidelined since June 15 with pulled muscles in his left side.

Stubbs led off the fourth inning with a double and later scored on Bruce’s hit for a 2-0 lead. He also walked, singled and stole a base, scoring twice.

Latos was coming off one of his worst performances of the season. A week earlier in Cleveland, he gave up seven runs in only four innings of a 10-9 loss.

“After my last start in Cleveland, I made some adjustments in my mechanics,” Latos said. “I was able to keep the ball down in the zone and bounce my slider when I needed to.”

He struck out six of the first 11 Brewers he faced, allowing only two hits over the first five innings — bunt singles by Nyjer Morgan and Martin Maldonado.

“I know he’s been struggling a little bit recently, but he threw a great game,” Brewers manager Ron Roenicke said. “His slider was outstanding. He threw strikes with every pitch. That was just a great ballgame.”

During the game, Latos’ wife, Dallas, tweeted that she has Weeks on her fantasy team. Weeks doubled and struck out three times against her husband.

Milwaukee’s Ryan Braun went 0 for 4 with three strikeouts, ending his hitting streak at 18 games. Aramis Ramirez had an eight-game streak snapped on his 34th birthday.

NOTES: The Reds sent OF Willie Harris to the minors to open a roster spot for Stubbs. … Richard Petty and Aric Almirola threw ceremonial pitches as part of a NASCAR-themed promotion. … Brewers RHP Marco Estrada, on the DL since May 24 with a strained right thigh, was activated and start the second game of the series against Bronson Arroyo. RH Mike McClendon was optioned to the minors. … 1B Corey Hart flipped into the Reds dugout while chasing a foul ball in the seventh, holding onto the railing to prevent injury. … Reds 3B Scott Rolen struck out three times against Gallardo, all taking. He disagreed with plate umpire Tim Timmons over the first two. Rolen struck out swinging in the eighth.