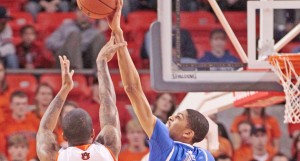 Kentucky's Anthony Davis (23) blocks the shot of Auburn's Varez Ward during a 68-53 win at Auburn last season. Davis is expected to be the first pick in the NBA draft on Thursday. (MCT Direct Photo)

The NBA is known for fast action. Fans can expect the same kind of action in Thursday night’s NBA draft.

Ironton assistant basketball coach Bart Burcham has studied this year’s field of free agents and has put together a mock draft.

Burcham likes the talent in this year’s draft.

“This is the first year there aren’t a lot foreign players and players you have to take a chance on,” said Burcham.

Although there is plenty of talent to go around, Burcham said fans shouldn’t get too comfortable with the draft order.

“I see a bunch of trades,” said Burcham. “Charlotte, Cleveland, Sacramento and maybe Golden State know one guy won’t help them that much. Charlotte might trade down with Cleveland and pick up an extra pick. Houston already has three picks and I think they’re trying to get up in the top 10.”

With the idea of the draft operating with no trades, here is how Burcham predicts the selection process:

1. New Orleans: Anthony Davis, PF, 6-10, Kentucky. He’s number one for sure. He can be an impact player for them. He makes the whole defense better and he’s unselfish.

2. Charlotte: Thomas Robinson, PF, 6-9, Kansas. He’s a solid player. Anything is an upgrade. He’s the most polished player, but I think they’re trying to trade the pick.

3. Washington: Bradley Beal, SG, 6-4, Florida. Unless they trade, this makes their starting five the best it’s been in years. They need a shooting guard. Cavs would like to have him.

4. Cleveland: Michael Kidd-Gilchrist, SF, 6-7, Kentucky. He’s my second favorite player in the draft. He’ll just keep getting better. Cavs need the most sound, steady guy. If Davis and Beal are gone, he’s the next best player for them. He plays hard on both ends.

5. Sacramento: Harrison Barnes, SF, 6-8, North Carolina. He’s way too spurty. I’d stay away from him. They want Thomas Robinson so they could trade down.

6. Portland: Damian Lillard, PG, 6-2, Weber State. He’s the best point guard in the draft and Portland needs one bad. They’ll go point guard and big guy with their picks but I’m not sure in what order.

7. Golden State: Andre Drummond, C, 6-10, Connecticut. This guy has a chance to be pretty good or he could be Greg Oden. They need a scorer, either a guard or small forward. Jerry West wants Dion Waiters, but the owner likes Drummond.

8. Toronto: Dion Waiters, SG, 6-4, Syracuse. Toronto was second worst in the league in scoring. They need someone to come in right now and put the ball in the basket.

10. New Orleans: Austin Rivers, PG, 6-5, Duke. Unless he’s taken before this, it’s a chance to put him at point guard or shooting guard. They’d like to put him with Davis and have a chance to make the playoffs.

11. Portland: Tyler Zeller, C, 7-0, North Carolina. He’s steady and the ACC Player of the Year. They need some size.

12. Houston: Meyers Leonard, C, 7-1, Illinois. He’s been shooting up in the workouts. He’s not a difference maker, but he’s going to be steady. Houston won’t keep all three picks. They’d like to get Dwight Howard from Orlando.

14. Milwaukee: Terrence Jones, PF, 6-9, Kentucky. Do you get the moody one or the one who was a beast after (Coach John) Calipari benched him? He can play either forward. When he’s locked in, he can play.

15. Philadelphia: Perry Jones III, PF, 6-11, Baylor. If he came out last year, he’d have been a top 10 pick. He has the physical abilities but can’t be consistent. When he does turn it on, he’s a beast.

17. Dallas: Terrence Ross, SF, 6-7, Washington. This guy can go as high as seven. Cleveland brought him in to work out in case they trade down. He’s a shooter and a slasher.

19. Orlando: Jared Sullinger, PF, 6-9, Ohio State. There are concerns over his back or he would go higher.

21. Boston: Royce White, PF, 6-8, Iowa State. When they played Kentucky, that was one of Kentucky’s toughest games and he was one of the best players on the court. He’s one of my favorite guys this far down in the draft.

22. Boston: Andrew Nicholson, PF, 6-9, St. Bonaventure. He’s another guy the more he works out the more people like him.

25. Memphis: Marquis Teague, PG, 6-2, Kentucky. They more the year went along, the better he got. Memphis needs a point guard.

28. Oklahoma City: Will Barton, SG, 6-6, Memphis. They take another shooter and it’s between four guys. He’s looked the best in workouts.