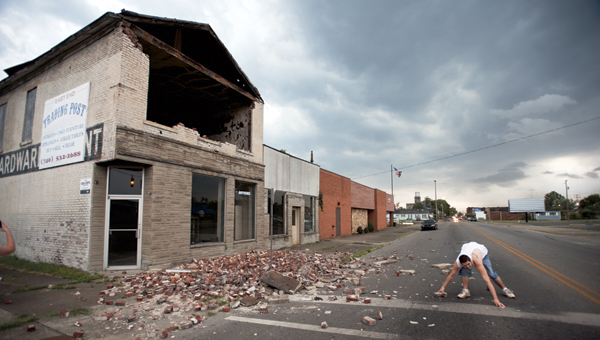 An area resident clears bricks off South Third Street in Ironton Friday as a storm makes it way through the area.

It could be days before electric service is restored to parts of Lawrence County after a massive storm swept through the Tri-State Friday, uprooting, trees, snapping utility poles and causing headaches for residents, businesses and the public entities that serve them.

In addition to the storm the heat wave that began earlier in the week persists, requiring the opening of cooling stations Saturday as well as the Lawrence County Emergency Management Agency office, which is usually not open on the weekend.

Downed trees and power lines, as well as structural damage to businesses and homes was the scene Friday evening after hurricane-like winds pushed through the area.

Wind speeds for the storm have been reported in the 80 to 85 mph range, stronger than Hurricane Ike’s 75 mph winds when it hit in 2008.

Todd Smith stood outside on his porch to survey the damage just after the winds knocked down one of his bradford pear trees onto a car parked in front of his house on Sixth Street Friday evening.

“I looked out the window just in time to see it go,” Smith said. “I wasn’t even expecting a storm.”

Trees and large branches littered streets and yards all over Lawrence County. Some had nearly missed hitting cars parked along the street in Ironton. Some residents took to their chainsaws to clear the fallen trees from their properties.

On South Third Street, a gust of wind blew the Plexi glass out of the tall, lighted sign. Employee Shane Russell, 19, described the severe weather.

“I just saw it through the window,” Russell said. “I thought it was hell. I looked out there and the sign was gone. … It was blowing everywhere. All over the street, the parking lot.”

Much of the sign and the bulbs had shattered into tiny pieces.

Employee David Gilmore, 20, rushed outside to pick up the large pieces.

“I just tried to get it as fast as I could,” Gilmore said. “I was worried it would bust the windows out of the cars. …You could hardly keep your eyes open.”

An entire wall of bricks from an upper floor was damaged and toppled onto sidewalk below and scattered onto Third Street. A few people nearby rushed to clear the broken bricks from the roadway.

A short time later, the Ironton Fire and Police departments arrived to secure the scene.

“The whole thing could come down,” he said. “All we can do is keep people away from it.”

Governors of Ohio, West Virginia and Virginia have declared states of emergency following the Friday storm.

AEP reported that at one time Saturday, more than 13,000 customers in Lawrence County were without power. That’s more than 53 percent of total customers.

Lawrence County Engineer Doug Cade, who worked alongside his staff to clear roadways Friday evening, said the Lawrence County 911 Dispatch Center seemed to encounter a large volume of calls from people who are oxygen machine-dependant and were without electricity to operate their equipment.

“We just had a bad evening,” Cade said.

“It finally came back on about 9 this morning,” Lawrence County EMA Director Mike Boster said. “Before that we had run on generator power all night long.”

Sheriff Jeff Lawless said the backup generator for his office and the jail failed and a backup for the backup was brought in to provide minimal electricity. (Doors at the jail are operated by both electricity and a manual system that works when the utilities do not.) Still, not every problem that arose was easily solved.

“It was hard fixing breakfast. We have an electric kitchen,” Lawless said. The prisoners got cereal and milk for that first meal.

Boster said one emergency radio communications tower was operating Saturday with a generator after losing its electric feed in the storm.

“They predicted winds of 60-70 miles an hour and from the damage I’ve seen it (the wind speed) was every bit of that,” Boster said.

At one time the outages affected about 633,000 customers in the state of Ohio. In total throughout Ohio, it was reported close to 1 million people were without power.

More than 1.4 million were impacted across AEP’s eastern service territory. These numbers are expected to increase as assessment continues.

AEP officials reported restoration efforts are ongoing and still in the early stages of damage assessment. At this point, it is anticipated restoration will continue for at least five to seven days, with the majority of customers to be restored in that time frame. This estimate could change if additional damaging weather crosses the area.

In Kentucky, AEP reported about 55,000 customers without power, including more than 13,000 in Boyd County and more than 7,000 in Greenup County.

To add insult to injury, the Tri-State was under a heat advisory over the weekend as temperatures soared into the 90s. National Weather Service officials in Charleston, W.Va., issued a heat advisory.

To aid those affected by the heat wave and/or loss of electricity, Lawrence County opened cooling stations.

As for the storm damage, Cade said he had a crew out Friday night after the storm ended and the work to clear roadways continued until 5 a.m. Saturday morning.

“It (the damage) was pretty much everywhere,” Cade said. “We had 12 roads with trees down. I think there were probably more problems than what was reported to us. County Road 52 had five trees down, Hog Run (County Road 181) had trees and power lines down, Porter Gap, that’s County Road 21, had seven trees down County Road 29 I think had eight trees down and three of them were large trees.”

Pickett Concrete, of Chesapeake, makes its way to the back of the new livestock barn located at the Lawrence County... read more