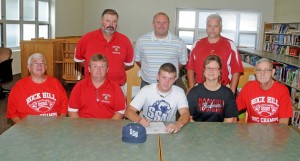 PEDRO — The Monkees had a song called “Daydream Believer” and another called “I’m A Believer.”

Rock Hill Redmen senior pitcher Drew Kidd had a dream and he made a believer out of the Shawnee State University Bears.

Kidd’s performance on the field helped him realize his dream when he signed a letter-of-intent to play for the Bears.

“It’s always been a dream (to play college baseball) since I was in little league,” said Kidd. “Baseball is my favorite. It always will be.”

The numbers Kidd posted helped to make believers out of the Shawnee State coaching staff.

Shawnee State assistant coach Chris Moore was excited to have Kidd join the school’s program that has won two league titles and lost in the conference tournament finals over the past three seasons.

“Drew’s best days are ahead of him,” said Moore. “He has some good, repetitive mechanics. He’ll get stronger and he’ll gain a little more velocity. He has a good frame. We think highly of him.

“We feel he can come in and contribute right away. We don’t want our pitchers to come in and sit around. We like his athleticism. He definitely has a lot of ability.”

Playing immediately is something that attracted Kidd to the Bears.

“I can help them pitching. I’m looking to step in and play whatever role they need,” said Kidd. “They work hard. They get up at 5:30 in the morning to go to the pool (workouts). It doesn’t matter what they want me to do. I’ll do whatever it takes to play.”

“He’ll fit in pretty well. He can help them out immediately pitching-wise,” said Litteral. “He can play some middle infield if they need him. This year or next year he’ll be a good asset to them offensively.”

On the offensive end this past season, Kidd had a .403 batting average with 17 runs batted in. He was 25 of 67 with 14 walks and only seven strikeouts.

A two-time All-Ohio Valley Conference selection, Kidd helped the Redmen to back-to-back league titles including a 10-0 record this past season. He was first team on the coaches’ All-Southeast District squad and was voted to the Mizzuno All-Ohio team.

“It’s going to be hard,” Kidd said of the possibility he will pitch and not get to be an everyday player.

“I’m used to being in every game and playing all the time either pitching or batting or playing in the field. I’m going to try to play in the field. They said they would give me a chance.”

Besides Shawnee State, Kidd was courted by Ohio Wesleyan and Alice Lloyd College.

“(Shawnee) is close to home, I love the campus and I like Portsmouth and the area around here,” Kidd said.

As I was watching the third round of Wimbledon on Saturday, I began to realize…oh, I can’t pull this off... read more