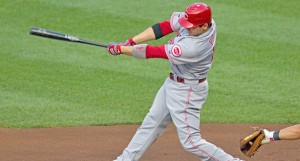 Cincinnati first baseman Joey Votto returned to the Reds' lineup on Tuesday and had two hits in a 3-1 loss to the Los Angeles Dodgers. (MCT Direct Photo)

LOS ANGELES (AP) — The Los Angeles Dodgers are trying to find new and creative ways to push across runs because of their sputtering offense and patchwork lineup.

Luis Cruz doubled home the go-ahead run in his second game with the Dodgers and stole home on the next pitch, leading Los Angeles to a 3-1 victory against Johnny Cueto and the Cincinnati Reds on Tuesday night.

“When I got to third base, I was excited because I got a hit — and right away [third base coach Tim Wallach] told me: ‘Squeeze,’ ” Cruz said. “When they see a guy going home, they always try to throw it high so that the catcher can just catch it and tag me.”

It was 1-1 in the seventh when James Loney singled with one out. Cruz followed with a drive to the gap in left-center and Loney barely getting his foot on the plate after catcher Ryan Hanigan stuck out his left leg to block him.

Cruz continued to third on the relay from shortstop Zack Cozart, then broke for home as Tony Gwynn Jr. tried to put down a suicide-squeeze bunt. Cueto’s pitch sailed off the tip of Hanigan’s glove and to the backstop, and Cruz was credited with the Dodgers’ first steal of home since Dee Gordon’s on June 1, 2011, against the Angels.

“I saw when the runner took off, so I threw it high. That way the catcher had a chance to get it and the hitter could not make contact. But it was too high,” Cueto said through a translator.

Scott Elbert (1-1) faced one batter, retiring Joey Votto on a flyout to end the seventh, and got the victory. Kenley Jansen pitched a perfect ninth for his 13th save in 16 attempts.

“You can’t help thinking about it,” Capuano said of not making the All-Star team. “But at the same time, I got into some tough situations where I really had to try to not think about anything else or else it could have snowballed out of control. I was aware that they had Cueto on the other side, and he was pretty effortlessly cruising through that game. So I knew that one pitch was going to be the difference.”

Capuano yielded a run, six hits and three walks through six innings and struck out six before he was lifted for a pinch-hitter. When the left-hander walked Cozart leading off the first it ended a string of 20 1/3 innings and 71 batters in which Capuano did not issue a base on balls.

Cozart was back in the lineup one night after getting hit in the helmet with a fastball by Chad Billingsley. The rookie played despite a mild concussion and residual headache. Votto also returned to action and had two hits after missing two games because of inflammation in his left knee.

Cueto committed a balk with two outs in the sixth while stepping off the rubber to get a fresh set of signs from Hanigan. That moved up Elian Herrera, and Bobby Abreu drove him in with a single that tied the score.

Cueto led off the Reds’ fifth with a single, advanced on Votto’s two-out single and came home when Brandon Phillips doubled.

Capuano escaped a bases-loaded jam in the fourth. He retired his first two batters before giving up two walks around a single by Ryan Ludwick, but Hanigan grounded out.

“I made a mistake when I walked Jay Bruce after getting those two quick outs, and that upset me a little bit because I let my guard down and was overthrowing some pitches to him,” Capuano said. “I just kind of labored a little bit. I felt like my release point was a little off and maybe I was a bit tired.”

The Reds this season are batting a meager .201 with runners in scoring position and two outs. Jay Bruce had two such opportunities, but grounded into a fielder’s choice in the first and struck out in the fifth after Phillips’ RBI double.

“They kind of had me on the ropes that inning,” Capuano said. “I was sweating a lot and I could see the sweat dripping off the bill of my cap. Phillips fought off some good pitches. I tried to throw a good fastball in, and I left it right down the middle. Sometimes when you’re laboring like that, your command suffers a little big. So I was happy that the damage was just one run.”

Los Angeles placed RHP Todd Coffey on the 15-day disabled list because of a partially torn elbow ligament that will require season-ending Tommy John surgery. The 280-pound reliever hurt himself while giving up a triple to Todd Frazier in the series opener, but struck out his next two batters after trainer Sue Falsone came out to the mound to check on him. … Due to Coffey’s injury, the Dodgers officially recalled Shawn Tolleson, who was still in town after getting optioned to Triple-A Albuquerque on Monday when Cruz’s contract was selected from the Isotopes. … Cruz started at 3B in place of Juan Uribe, who has a sprained right ankle. X-rays taken Tuesday were negative. … Dodgers RF and RBI leader Andre Ethier missed his sixth consecutive game because of an oblique strain on his left side. He could be a candidate for the disabled list when 2B Mark Ellis is ready to be activated on Wednesday. … Dodgers injured CF Matt Kemp, who began a minor league rehab assignment Tuesday night, was replaced on the NL’s All-Star roster by Braves 3B Chipper Jones. It will be Jones’ first game ever in Kansas City, the only big league city he has never played in. The 19-year veteran is retiring at the end of the season. … Reds CF Drew Stubbs was 0 for 4 with two strikeouts and is hitless in his past 24 at-bats.

LOS ANGELES (AP) — Every year when the All-Star team is announced, there are some perceived snubs. Cincinnati starting pitcher... read more