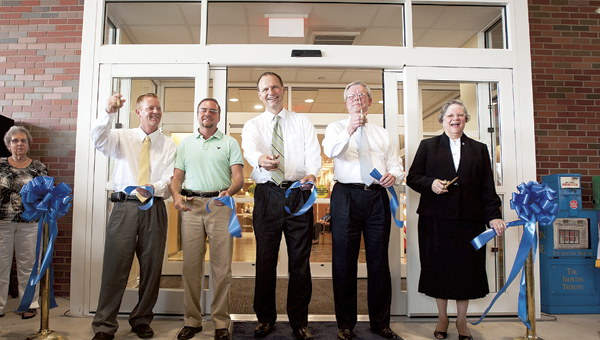 Rick Meeks would prefer to stay healthy, but Sunday, he got a peek at Ironton’s new health care facilities that are now open and waiting for him, just in case.

“I commend St. Mary’s for coming to Ironton,” Mayor Rich Blankenship said, noting that in addition to the new jobs, the new facility brings “a sense of hope and quality health care” to a community in need of both.

Lawrence County Commission President Les Boggs pointed out that St. Mary’s fills a void left years ago when Lawrence County’s only previous hospital closed its doors, forcing Lawrence Countians to go out of state if their medical treatment required hospitalization. He spoke of the collaboration between St. Mary’s area political leaders, the Ironton-Lawrence County Community Action Organbization and the Lawrence Economic Development Corporation over a period of several years that turned a dream into reality.

“This hospital didn’t happen by accident,” Boggs said. His pun drew laughter from the crowd.

CAO Executive Director D.R. Gossett touted the fact that Lawrence County can now boast of having the most technologically advanced health care facility in the Tri-State.

“We have turned a page in history in this county,” Gossett said.

“There were moments when some were not sure this (medical facility) would happen,” Sellards said. “We stayed the course and this is the end result.”

The standing-room-only crowd continued to flow in despite the 100-plus-degree heat even after the ceremony began; well-wishers and potential patients stayed in spite of the thunderstorms that dumped rain on the ceremony.

In addition to the comments by local officials and St. Mary’s executives, the assembly was treated to patriotic music from the Ironton High School Varsity Singers, who sang the National Anthem, and IHS soloist Trent Barnett, who sang “God Bless America.”

After the ribbon was cut, the well-wishers got their chance to see what the years of planning and construction produced.

“I think this is just the berries,” Nancy Hampton said as she toured the facility. “This is so needed.”

The medical center will be open 24 hours a day, seven days a week. It will have an emergency room, a laboratory, family care and pediatrics and more.