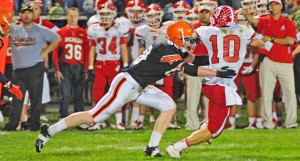 Ironton’s Aaron Stephens (left) sacks Jackson quarterback Allen Osborne in a game last season. Not only is Stephens a top prospect as an end, he is one of the top longsnappers in the nation. (The Ironton Tribune / Tony Shotsky of Southern Ohio Sports Photos)

Aaron Stephens’ chances of attracting college scouts is a snap.

Stephens recently participated in a talent evaluation camp as a long-snapper and had an average snap time of 0.85-tenths of a second to rank No. 15 nationally. His best snap time was 0.81 and he finished with a total of 17.0 accuracy points.

The academy ranks the top players evaluated throughout the organizations camps held in more than 50 cities across the United States and then an overall list is made on a national basis.

Stephens went to the camp on June 30 in Huntington, W.Va., but he attended a camp at Ohio State prior to the Ray Guy Camp and enjoyed even better results.

“To be 100 percent honest, (the Ray Guy Camp) was pretty bad personally,” said Stephens. “I had a 0.72 time at the Ohio State camp. At Huntington, I was trying to figure out how to snap without looking and I developed a hitch.

“When the ball moves, they start your time. So I picked up the ball and it was taking an extra tenth off my time.”

The 6-foot-3, 215-pound Stephens will be a senior this season. An outstanding blocker, the two-way end was a first team Division IV All-Southeast District selection as a tight end last year and was special mention All-Ohio.

Stephens said his ability to longsnap has earned some extra attention with the college recruiters.

“Akron seemed to really like me. I’ve been talking with TCU’s coach and we’ve talked about it. Those are the two schools who have shown the most interest so far,” said Stephens.

The Ironton senior began longsnapping in the seventh grade when coaches were looking for someone to snap on punts. Stephens gave it a try and instantly won the position.

“The coaches said as long as we get the punt off, you can run down the field and hit somebody because you didn’t have to block. I got to run down and hit right away. I was loving that,” said Stephens.

“In high school things are harder. I found myself getting good at this and I realized I can get a scholarship with it, so I’m putting in the time to get better.”

Athletes named to the Ray Guy Top Prospects list for each camp were individually evaluated and graded on kicking, punting and longsnapping based on accuracy, timing and distance.

Longsnappers are evaluated over a distance of 15 yards.

Ray Guy is a Hall of Fame punter who played with the Oakland Raiders. The camp is held annually in Huntington. Many participants at the Ray Guy camp have gone on to earn college scholarships.

There are currently 707 Ray Guy camp alumni on college rosters and 18 are active on NFL rosters.

“It’s all about credibility,” said local academy director Rick Sang. “Athletes named to this exclusive list will appreciate their accomplishments much more by knowing that they have earned it.”

SAN DIEGO (AP) — This is exactly the way the Cincinnati Reds wanted to play. After struggling for much of... read more