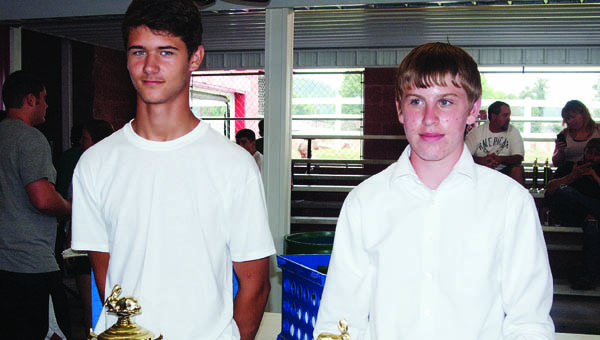 ROME TOWNSHIP — A relative novice and a veteran of 4-H competitions took top honors in the market rabbit show Monday morning at the Lawrence County Fairgrounds.

Rhett Ball of Kitts Hill took the grand championship prize. This was the second year for Rhett to compete in the rabbit category.

The secret to his win was simple.

“It is just working with them,” he said after he was presented with his trophy.

This was the fifth year for Jess Williams to compete. Jess took the reserve championship prize.

“It is all about having fun and taking care of my rabbits,” Jess said.

Judging the competition this year that drew 15 separate classes of competitors was Carl Budnick of Baltimore, Ohio, who said he was impressed with the entrants in all this classes this year.

What he looks for in the top animals is if the confirmation is representative of the breed.

“I look for nice full shoulders, a nice rump and nice fur,” he said. “This was a spectacular show. The kids were well-prepared and had excellent rabbits.”