Skills of 4-Hers take top awards 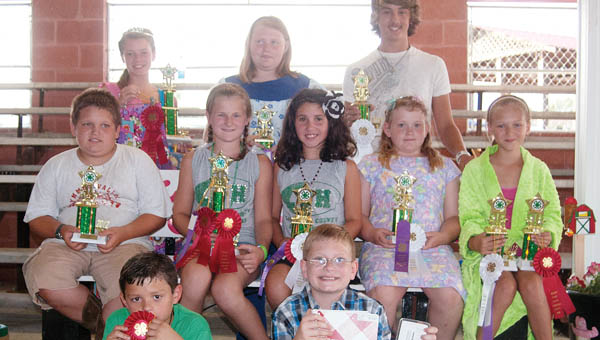 ROME TOWNSHIP — Lawrence County Junior Fair volunteer Lana Hardy told the crowd gathered at the 4-H shelter Monday night the skills young people learned in their clothing and food preparation projects are skills that will last them a lifetime. The skills of several young women were on display at the fashion show that evening. Young ladies from several 4-H clubs strutted their stuff, showing off everything from hotly decorated handbags to complete outfits.

Deanna Fliehman, of Starlite, won first place in the Sew Fun category with her floral dress and coordinating headband.

Macy Perry and Bela Delawder, both of Barnbusters, won first and second places, respectively in the Accessories for Teens category. Delawder decorated a black handbag and Perry made a necklace.

The clothing, along with cooking projects, were judged at a competition in June with the winners announced at the fair.

In the nutrition skillathon, Devon Forbush took home the top honor in the junior division followed by Katy Spears and Hunter Haynes.

When it meets at 6 p.m. today, Ironton City Council will discuss a proposed agreement with KRZ Design to provide... read more