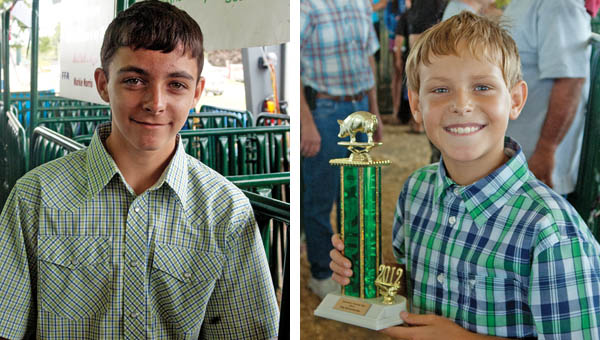 ROME TOWNSHIP — Squeals of excitement could be heard all over the arena at Thursday’s hog showmanship awards at the Lawrence County Fair.

And the hogs were pretty excited, too.

Winner of the senior showmanship award was 14-year-old Starlite 4-Her Markie Norris. This was Norris’ sixth year taking a showmanship honor, one for each year he has participated.

His mother, Reanea Norris, was excited for her son’s victory and boasted about his dedication and responsibility.

“He walks with the animals everyday as soon as he gets them,” she said of Markie’s process. “He washed them everyday.”

This year’s junior winner, 10-year-old Jacob Sarver, said he was surprised to win the showmanship award for his class. This was the Ranch Hands 4-H member’s second year participating.

Sarver said working with hogs can sometimes be difficult.