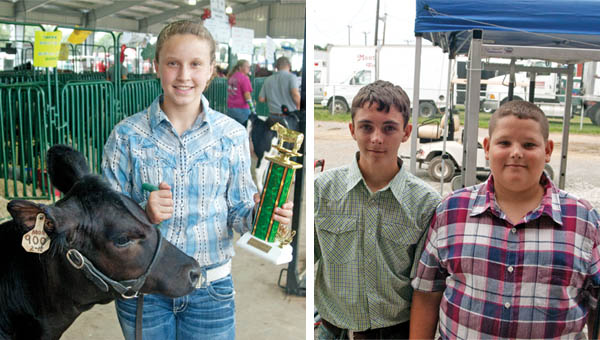 ROME TOWNSHIP — Earlier this week at the fair Chad Morris was in the show ring, but that was because he was helping out his sister who had hurt her arm by showing her steer for her.

But on Thursday evening Chad was front and center showing his feeder calf and his work brought him the Reserve Champion trophy.

Chad from Kitts Hill is a member of the Starlite 4-H Club.

Taking top honors was Markie Norris, a veteran winner at the Junior 4-H Fair, who has been competing for the past six years. Markie is also a member of the Starlight 4-H Club.

Despite taking a small tumble in the show ring thanks to a balking calf, Ann-Michal Dyer, 14, of Chesapeake, recovered with aplomb to take the trophy in the feeder calf showman contest.

“I feel great even though my calf was going crazy,” she said.”

Ann-Michal, who is a member of the Scottown Farmer and Farmerettes, has been showing since she was 8.

“I just grew up doing this,” she said.

Judge for the show Regan Bowman of Greenville gave each competitor a few tips for future shows while praising the young people.

“They are good at calf presentation,” Bowman said. “These calves have only been in the ring a couple of times and not performing as well as yearlings would.”

But the competitors impressed the judge who praised the county’s 4-H program.

“If this is what your 4-H program is about, you have a great destiny,” he said.

By RUSTY MILLER AP Sports Writer   WORTHINGTON — Nathan Kerns knows they don’t give out any awards for leading... read more