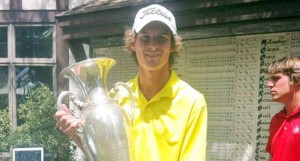 Ironton’s Nathan Kerns — a senior to be at Marshall University — won the 116th Ohio Amateur golf tournament on Friday. Kerns had a six-under-par 282 four-day total on the Brookside Golf & Country Club Course in Worthington. (Photo Submitted)

WORHTINGTON — When the going gets tough, the tough get going.

Ironton’s Nathan Kerns proved his mental toughness as he rebounded from a double bogey on the 16th hole to par the final two holes and captured the 116th Ohio Amateur Golf Championship on Friday.

Leading by four shots with four to play, Kerns was hit smack in the face with adversity on the No. 16 hole.

“I got to 16 that was a short par three. There green had a huge slope and I hit the back left corner. It was impossible to putt and I took a double bogey,” said Kerns.

“But I hit a great tee shot on the next hole and got my momentum back. I didn’t know how big a lead I had until 18. It was probably a good thing. It helped me focus.”

Kerns, 21, credited his ability to recover to the coaching he has received from Ironton High School head coach Jeff Kerns who just happens to be his father.

“He’s helped me a lot with my mental approach,” Kerns said of his father. “He’s put a special focus on that. You make double bogey on 16 to cut your lead in half, you have to approach that next hole quickly. If not mentally prepared, it only gets worse. Fortunately, I was able to gather myself and hit that ball.”

The recovery and strong finish gave Kerns a two-shot win over former Ohio State player Alex Redfield who shot a 70 to finish second. Kevin Grabeman — another former Buckeye golfer — carded a 71 and was third at 286.

Second-round leader Bill Williamson of Cincinnati began the day two shots back but shot a 77 to finish fourth, five shots off the pace.

Although Kerns wasn’t sure of where he stood on the leaderboard, the Marshall University senior-to-be admitted he felt the pressure.

“It was a relief when I finished the round. It seemed like it was forever,” said Kerns who was greeted by family and friends with shouts of “We are … Marshall!”

“But it was a pretty big win. This one is pretty special. There are so many good players in this field. The key is I didn’t play myself out of the tournament at any time.”

Kerns led by as many as six shots after playing the front nine until he double bogeyed the long par-4 ninth hole. His lead went to three went he bogeyed No. 12, but he followed with a birdie on the next hole to led by five with five holes to play.

Other golfers in the field were impressed with Kerns’ unwavering demeanor.

Ironton’s Tony Brown shot rounds of 72-73-74-77 for a 296 total. Brown is not only a former Ironton player and assistant coach but was an All-American at Shawnee State.

The field 144-man field included 34 teenagers. More than 500 golfers attempted to qualify for the tournament.

The win was the second big tournament for Kerns who earlier in the year won the Mid-Ohio.

“I’m on a roll. I’ve been in a pretty good rhythm most of the summer. It’s all about ball striking for me. I hit the ball really well this week. I kept it in play,” said Kerns.

This marked the fourth time Kerns has qualified for the Ohio Amateur. He missed the cut four years ago, then finished 19th and 17th the past two years, respectively.

“It’s a process. You get your feet wet the first time. It’s a huge tournament. You’ve got guys who you grew up with all your life and you know they can play,” said Kerns.

“The first year I was new to the whole thing. It’s a little bigger than you are ready for at the time. When get to college and play bigger tournaments, you realize you can compete in these tournaments. Pretty soon you have the confidence you can compete.”