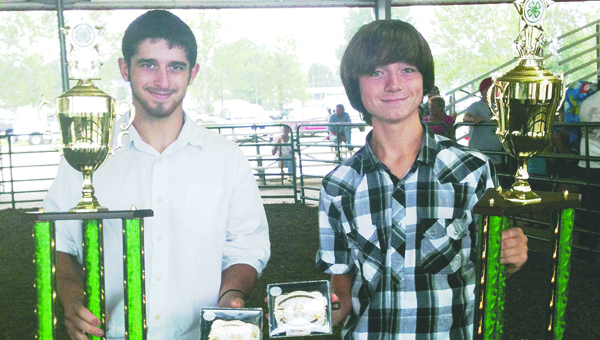 ROME TOWNSHIP — Exceptional knowledge and a good handling of six species of animals.

That’s what was attributed to Daniel Mootz and Heath Wade taking home the senior and junior showman of showmen awards Friday at the Lawrence County Fair.

This was Heath’s first year participating in the fair.

Each of the junior showmen rotated around the arena and answered questions about each species of animal: Rabbit, chicken, goat, lamb, hog and steer.

Heath, who won top honors at the goat showman show Tuesday, said for him, the most difficult animal to answer questions about was the chicken.

“I don’t know a lot about chickens,” he said.

Next year, Heath will move up to the senior class, where he could face off with senior showman winner Daniel Mootz, if the two win their respective species titles.

Mootz said he was really excited to win the overall showman award.

“I wasn’t really certain until the end,” Mootz said. “I knew my competition, and he got second (place).

Mootz was referring to competitor, and best friend, Scott Dial.

The senior group had to show each animal for a judge. Mootz entered the fair this year with a lamb. He said the most difficult animals for him were the chicken and hog.

“The hogs because you never know that they are going to do,” he said. “ and the chickens because they don’t like to cooperate.”

Mootz said he will continue to work hard for next year’s fair, which will be his last to compete. He also said he wanted to help the younger 4-Hers and had a bit of advice for any newcomers.

“Don’t ever think you can’t do something just because you’re little,” Mootz said.