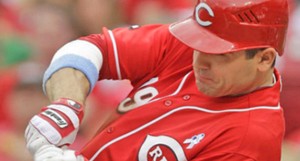 Cincinnati Reds’ first baseman Joey Votto will miss 3-to-4 weeks due to surgery to repair a torn cartilage in his left knee. (MCT Direct Photo)

CINCINNATI — Reds first baseman Joey Votto will have surgery to repair torn cartilage in his left knee, leaving the NL Central leaders without their best hitter for the next three to four weeks.

The 2010 National League MVP hurt the knee while sliding into third base June 29 in San Francisco, but has continued playing. Votto started for the NL in the All-Star game last Tuesday.

A medical exam Monday night detected the tear and Votto will have arthroscopic surgery on Tuesday.

General manager Walt Jocketty said Votto didn’t have an MRI earlier because the first baseman didn’t think he needed one.

“He didn’t request it until then,” Jocketty said. “He said it wasn’t a problem until the last couple of days.”

Votto decided to have the surgery. Jocketty said it’s a simple procedure that takes only 20 to 30 minutes.

“It is in my best interest and in the best interest of the team to do it now so that I can be healthy during the last two months of the pennant race,” Votto said in a statement.

Votto is batting .342 with 14 homers and 49 RBIs. He leads the NL in doubles, walks, on-base percentage and extra-base hits.

“We’ll see what we can do internally, initially,” Jocketty said. “But it’s going to be difficult to replace Joey Votto.”

He went hitless in his first two games back from the All-Star game then had a single and an RBI double during a 4-2 win over St. Louis on Sunday night that moved the Reds into sole possession of first place in the NL Central.

The Reds didn’t immediately make a move to replace him on the roster.

Cincinnati has been in first place for 46 days because of its pitching and the NL’s top defense. The Reds have used only five starters, a modern franchise record this deep into the season, and their bullpen is the best in the league.

The offense has struggled, ranking in the middle of the league, and the loss of Votto costs the team its most consistent hitter.

Votto was named MVP after the Reds’ run to the NL Central title in 2010, but Cincinnati got swept by Philadelphia in the first round of the playoffs.

He received a 10-year contract extension before the start of this season that added $225 million to his deal.

Now, the Reds will find out just how much he means to the franchise. They lost their first game without him, 5-3 to the Arizona Diamondbacks on Monday night.

“He’s an MVP, a Gold Glover. What more can you ask in a guy?” said Todd Frazier, who filled in at first base. “Injuries are huge in baseball. He’s got that presence. Whenever he is out there, he can do damage.”

Reds starter Bronson Arroyo saw Votto shortly before the game and got the bad news directly.

“He looked funny,” said Arroyo, who lasted only three innings. “I said, ‘Are you playing?’ He said, ‘No, I need surgery.’ At this time of year, if we can keep pressure on the other teams in our division and stay in the race — if we can weather the storm — he could give us a lift when he comes back.”

Instead of having a mainstay at first base and the No. 3 spot in the order, manager Dusty Baker will have to get creative. There’s no obvious replacement on the roster or in the minors.

Baker’s first inclination was to have Frazier, who is Scott Rolen’s backup at third base, play more at first.

“That’s a good possibility,” Baker said. “He’ll play some third, some first. (Miguel Cairo) will play some first. He’s an outstanding first baseman. We’ll mix and match depending on offensive and defensive matchups.”

The challenge is to stay in contention until he gets back.

“We’ve got the guys who can do it,” right fielder Jay Bruce said. “The pressure’s on, but we’ve got to step up. I’m confident that we have those guys on the team.

“Look at the Dodgers. They lost Matt Kemp, but they weathered the storm. It’s early enough that we can weather the storm.”

By JOE KAY AP Spors Writer   CINCINNATI — One bit of news took the Cincinnati Reds from their season... read more