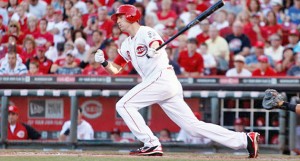 Cincinnati outfielder Drew Stubbs had two hits including a double and drove in the only Reds run in a 7-1 loss to the Arizona Diamondbacks on Wednesday. (Courtesy of the Cincinnati Reds)

CINCINNATI (AP) — Mat Latos kept his streak going for more than three months. Two bad pitches reminded him how it feels to lose.

Jason Kubel returned from a sore hamstring and homered in his first two at-bats against Latos on Wednesday night, powering the Arizona Diamondbacks to a 7-1 victory that dropped the Cincinnati Reds back into a first-place tie in the NL Central.

Kubel hit a two-run shot in the first inning and a solo homer in the fourth off Latos (7-3), who lost for the first time since April 18. Latos also forced in a run with a bases-loaded walk in his second-shortest start of the season.

“If you throw pitches right down the heart of the plate to major-league hitters, they’re going to hit the ball hard,” Latos said.

Kennedy made the early lead hold, giving up eight hits and a run in eight innings. He struck out seven and didn’t walk a batter.

The Reds have lost two of three since learning that first baseman Joey Votto needed surgery on his left knee. He’s expected to be sidelined for three to four weeks.

Votto had torn cartilage repaired on Tuesday. He was in the Reds’ clubhouse on Wednesday, getting treatment and defending the decision not to have an MRI on the knee for more than two weeks.

Cincinnati’s offense has struggled without him, knocking the Reds into a first-place tie with Pittsburgh. The Pirates beat Rockies 9-6 earlier Wednesday.

Their best chance was another solid start from Latos, who hadn’t lost in his last 15 games. The right-hander was 7-0 with 3.43 ERA during that span, which included three blown saves behind him.

This time, Latos didn’t have it.

Kubel led off the fourth with his 17th homer on a down-the-middle slider, his first multihomer game of the season.

“Kubel was the only one I really struggled with,” Latos said. “That’s the way the game goes.”

Latos failed to make it through the fifth inning for only the third time this season. Hill doubled home a run in the fifth, and the Reds decided to intentionally walk Kubel with two outs to load the bases for Miguel Montero. Latos fell behind 3-0 in the count, got two foul-ball strikes, then threw one up-and-in for a walk that made it 5-1 and ended his outing.

Latos took off his red cap and fired his glove into the dugout tunnel when he left the field.

The Reds stranded runners in scoring position in each of the first four innings. Drew Stubbs singled home a run in the second, but the Reds couldn’t get another clutch hit out of a lineup missing its most dependable run producer with Votto gone.

They had a chance in the first when Stubbs doubled and moved to third on Brandon Phillips’ infield single with one out, but Jay Bruce and Ryan Ludwick popped out.

They got a run in the second on Stubbs’ single, but might have had more in not for Latos bunting into a forceout.

“Those were key plays early,” Reds manager Dusty Baker said. “(Kennedy) had been struggling. That was his best game in a while. You’re thinking if you get to him early, maybe he starts thinking, ‘Here we go again.’ But he settled down and got some run support.”

NOTES: It was Kubel’s seventh career two-homer game. … The Diamondbacks sent rookie RHP Trevor Bauer back to Triple-A a day after his worst start in the majors. The 21-year-old lasted three innings in a 4-0 loss on Tuesday night. RH reliever Jonathan Albaladejo was called up from Reno. … The Reds optioned RHP Todd Redmond back to Triple-A Louisville and called up OF Xavier Paul to help the offense while Votto is out. Redmond was with the Reds for only one day, called up for insurance in case RHP Johnny Cueto had problems with a blister on his pitching hand Tuesday night. … Cincinnati gave away Bruce bobbleheads. He went 0 for 4.

CINCINNATI (AP) — Joey Votto is defending the decision to wait more than two weeks before getting an MRI that... read more