Walk in the park gives Scott lead at British Open 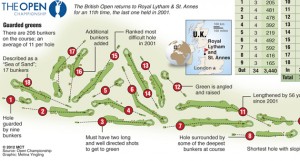 Illustrated diagram of course for the 2012 British Open, which will be played July 19-22 at Royal Lytham and St Annes Golf Club, England. (MCT Direct Graphic)

LYTHAM ST. ANNES, England — Unlike the guys in charge of the weather forecast, Adam Scott got everything just about right Thursday in the British Open.

Scott was determined not to take himself out of contention in the opening round at Royal Lytham & St. Annes, as he had done in the first two majors this year. Caddie Steve Williams gave him a pep talk to play the first hole like it was the last one. Even more inspiration came from the international flags posted above the massive grandstand down the left side of the first tee.

They weren’t flapping. They were sagging.

In surprisingly calm conditions, Scott raced out to the lead and almost into the record book. He stood on the 18th tee needing a birdie to break the major championship scoring record, and instead made bogey to settle for a 6-under 64.

It matched the lowest Open round ever at Royal Lytham and gave the Australian a one-shot lead over Paul Lawrie, Zach Johnson and Nicolas Colsaerts.

“It was just like a nice walk in the park today,” Scott said.

“And it was not what we’ve experienced in the practice rounds. I’m sure there’s going to be some weather elements thrown at us the next three days, so just going to have to knuckle down to handle that. But I’m confident. My ball striking is good. I think I can get it around no matter what the conditions are.”

The proof was in limp flags and red numbers on the scoreboards.

Scott was among three dozen players with rounds in the 60s, a group that included Tiger Woods. Trying to end a four-year drought in the majors, Woods raced out to four birdies in seven holes to take the early lead, only to settle into a series of pars and one adventure through grass up to his knees for a lone bogey that gave him a 67. In his third Open at Lytham, Woods said it was as easy as he had ever seen it play.

Lawrie won his British Open in nasty conditions at Carnoustie in 1999, and the Scot showed he could handle the calm weather with equal aplomb. He ran off three birdies over the last five holes. Johnson, who won the 2006 Masters in the wind and cold at Augusta National, flirted with a major record-tying 63 until a bogey on the 17th hole. Colsaerts, the big hitter from Belgium, holed out with an 8-iron on the 481-yard second hole for eagle and added four birdies for his 65.

Brandt Snedeker was another shot behind at 66.

“We had a little wind early on the front nine, but it kind of calmed down the second half,” Snedeker said “That’s the best Americans are going to see over here.”

Rory McIlroy was panned last summer at Royal St. George’s for saying he prefers calm conditions, so maybe this was more to his liking. He wound up in the group at 67 after a wild day filled with great shots, bad luck and a bump on the head for a 16-year-old spectator standing in the wrong spot.

McIlroy was at 3 under with four holes remaining when his drive on the 15th hole sailed to the right of the fairway. It plunked the teenager in the head and caromed farther to the right. The teen was OK. The ball settled a few inches beyond the out-of-bounds stakes near a corporate tent, sending McIlroy back to the tee to play his third shot. McIlroy gave the lad a glove on which he wrote “Sorry” with a frown face and “Rory.”

“He could have headed it the other way,” McIlroy joked later. “It would have been on the fairway.”

He bounced back from that double bogey by driving the 336-yard 16th hole and two-putting for birdie, then making birdie on the final hole to join guys like Ernie Els, Masters champion Bubba Watson, Graeme McDowell and Steve Stricker, who followed an eagle from the 13th fairway with a double bogey on the next hole.

One sign of the easy scoring was that no one shot in the 80s. That hasn’t happened in the opening round of the British Open since 1998 at Royal Birkdale, where conditions also were benign. Woods opened with a 65 that year, only to get blown away in bad weather the next round.

Perhaps bad weather is on the way. The forecast hasn’t been nearly as accurate as Scott was with his tee shots on Thursday — sunshine when it calls for rain, clouds when the forecast is for dry spells.

Els and his caddie, Ricci Roberts, figured out immediately that dead calm translates to low scores.

“It’s on today,” he said. “I said to Ricci, ‘I might not have the chance again.’ You never know how the weather is going to be.”

But even in such weather suited for low scores, Lytham still required tee shots in the fairway. It still demanded good shots. And it was a struggle for some.

Lee Westwood, despite a birdie-birdie start, hit a bunker shot across the third green to take double bogey, and had to play a left-handed shot out of the back end of a pot bunker on the 13th hole as he staggered to a 73. Luke Donald made a sloppy bogey — his only one of the round — on the final hole for a 70. Justin Rose played in the same group as Woods and already was nine shots behind after eight holes. He rallied for a 74.

Lytham was there for the taking — as long as the tee shots found the fairway.

Phil Mickelson, a runner-up at Royal St. George’s last year, went from the left rough to the right rough on the par-5 seventh to make double bogey on the easy hole at Lytham. On the next hole, he tried to hit wedge out of a pot bunker and it got snagged in high grass just over the lip. A small search party nearly didn’t find it, and Mickelson had to take a penalty shot to drop it back in the fairway.

“I putted poorly today and I drove it horrific and the chipping was below average,” he said.

Scott had no such issues. After an early bogey when he got out of position on the third hole, he warmed up with birdies on the sixth and seventh holes, and then ran off three straight birdies on the back nine, starting with the 598-yard 11th hole that he reached in two shots.

Royal Lytham was changed to a par 70 this year, and with a birdie on the 16th that put him at 7 under, Scott needed one more birdie to become the first player with a 62 in the majors. There have been 25 rounds of 63.

“I was waiting to use the bathroom going to the 17th tee and I did a look at the leaderboard and realized it was a par 70,” he said. “And I also probably then realized that I wasn’t going to be the guy to shoot 62. It’s one of those things that you don’t want to go through your mind, thinking about your final score and stuff like that.”

He slightly pulled a 2-iron off the tee on the 18th, played out of the thick rough short of the green and failed to save par.

No matter. His 64, which matched Tom Lehman’s third-round score in 1996 when he went on to win his only major.

Scott can only hope for the same outcome. His 18 worldwide wins include The Players Championship, the Tour Championship, and the Australian Open. He has reached as high as No. 3 in the world. He is missing the kind of trophy that defines great players.

“I’ve won a couple of tournaments most years, which is a good habit to have because it’s getting harder and harder to win out here,” Scott said. “And I’m looking for a win this year. But I would say I haven’t achieved what I wanted until I win a major.”

CINCINNATI (AP) — Brandon Phillips felt Cincinnati’s fans were a bit premature in their booing, so he took it upon... read more