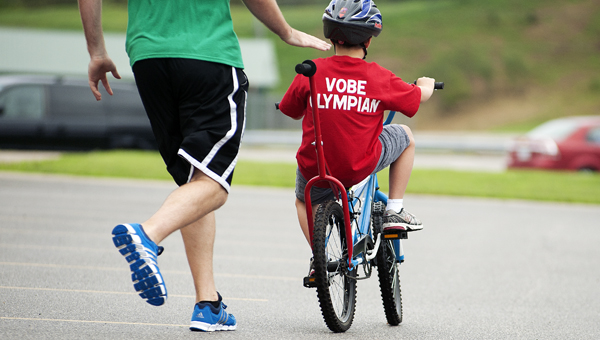 HUNTINGTON, W.Va. — With a helmet on his head and a smile on his face, Gavin Frazier rode his bicycle around and around Friday, just like other children his age frequently do.

But Gavin isn’t like other children his age. Before Wednesday the 13-year-old hadn’t been able to ride a bicycle without the aid of training wheels. Even that was a struggle, his mother, Kim Turner, said.

“You can’t get bigger bikes with training wheels,” Turner said. “And when he couldn’t go fast on the smaller bike, he would get frustrated.”

That’s why Turner and her family came all the way from Damascus, Va., so Gavin could participate in the 2012 Lose the Training Wheels Camp, hosted by the Marshall University kinesiology department.

The camp starts children on adapted bikes, called roller bikes. Like a training wheel, each bike has a roller on the back that keeps it stable, eliminating wobbling. Through the week, the rollers are changed, tapering at each level, teaching the body how to balance. When the last in a series of eight rollers is removed, the child is left riding a two-wheeled bike on his or her own.

Each bike also has a handle behind the seat for volunteers to assist the riders.

Gavin was riding on his own by the third day, Turner said.

“All right, Gavin!” Turner shouted on the last day of camp. “Pedal hard!”

Turner explained her son has Down syndrome and that balance is something Gavin struggles with.

“The rollers gave him the confidence not to watch his feet,” said Turner. “It’s an amazing concept. It’s unreal because he hasn’t watched his feet.”

Last year, Norweck said Christopher did well. He made it to two wheels with a volunteer assisting him on the bike. He was able to pedal and steer by himself.

This year, Christopher, 9, was on his own, pedaling around the parking lot with a volunteer running to catch up to him.

Christopher also has Down syndrome and Norweck said he has worked hard.

“It’s so hard to push your kids but, ultimately, you know what’s best for them,” she said.

This year was the second year for MU to host the five-day camp at Huntington High School.

Dr. Gregg Twietmeyer, assistant professor of kinesiology at MU, organized the camp and many of the volunteers were students. He said enrollment for the camp more than doubled from last year — 11 children in 2011 and 26 children this year.

“It’s been a great success,” Twietmeyer said. “We’re thrilled to host it.”

Twietmeyer said riding a bicycle is like a rite of passage for children, but can be difficult for those with disabilities. The camp, he said, teaches those children with barriers that bikes are fun.

“And the socialization possibilities,” Twietmeyer said, “when they get to ride with their friends. It’s great in so many ways.”

Twietmeyer said some of the parents had been working with their children for years, trying to get them comfortable on a bike.

This year, Twietmeyer’s nephew, Bennett, was finally old enough to participate in the camp.

Bennett’s father, Geoff Twietmeyer, said his 8-year-old did a lot of falling down, but the camp has paid off.

“He didn’t ever ride much,” Geoff said. “He couldn’t balance on the training wheels.”

Julie and Dennis Davis of Proctorville brought their 9-year-old son, Ethan, to the camp.

Ethan has mosaic Down syndrome and also has trouble keeping his balance on a bike. During the camp, he rode a tandem bike with an instructor, but ventured out into the parking lot on Friday for some solo laps with his father running along side.

Julie said they were already planning on returning for next year’s camp.

“We will be keeping him on as much as we can with what he has learned here,” she said, noting they get to keep the hand bar on the back of Ethan’s bike. “It has really given him a lot more confidence.”

Twietmeyer said he was glad participation for this year’s camp grew by more than 100 percent, but he is hoping even more will join next year.

He also thanked dean of the college of health professions at MU, Dr. Michael Prewitt, for his support.

After losing a chance for approximately $2.5 million in federal funds the project to save Memorial Hall may be over... read more