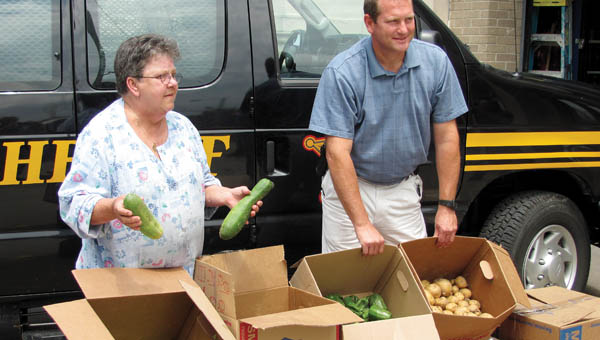 Lawrence County Jail matron/cook Patty Cartmell and Sheriff Jeff Lawless inspect vegetables from the county work farm. The food will be used to feed prisoners at the jail.

It’s the kind of gift that Lawrence County Sheriff Jeff Lawless isn’t accustomed to getting: 115 pounds of potatoes, 65 pounds of cucumbers, 12 pounds of zucchini and a pound and a half of tomatoes, compliments of the newly established Life Intervention & Diversion (LID) Work Farm.

The farm is operated by the county and is maintained by convicted felons who perform community service as part of their sentence.

Monday, county officials and farm workers delivered the first yield from this year’s crop — 201 pounds of food — to the Lawrence County Jail and a grateful sheriff.

“The price of vegetables has skyrocketed,” Lawless said. “This is truly going to help.”

Lawless has a point. The state has strict guidelines about what must be fed to prisoners at county jails and state facilities. These guidelines are becoming increasingly expensive for a county with a growing jail population and a restrictive jail budget.

Asked what this food would have cost if he had gone to a supermarket and purchased it, Lawless said he did not know but that it is certainly an expense savings.

Lawrence-Scioto Solid Waste Management District Director Dan Palmer, whose agency is one of the key entities in the work farm program, said the next yield of the 2012 crop will go to the Lawrence County Juvenile Center in Elizabeth Township. There are plans to distribute the produce to food pantries across the county as well as to senior centers and other public entities.

The farm was established earlier this year as an alternative sentencing option. The state does not typically allow felons convicted of first, second and even some third degree felony offenses to be sent to a state prison. The farm was created to be a form of punishment and, hopefully, a means of helping rehabilitate felons.

Indictments for drugs, forgery and theft were returned this week by the Lawrence County Grand Jury. According to information from... read more