Meyer: there’s no such thing as buffer year 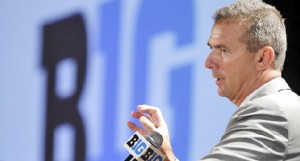 CHICAGO — Urban Meyer is back after a year away from the sidelines, challenged by the chance to make Ohio State an elite college football program once again.

Meyer won two national championships at Florida but twice left the program, citing health issues. He retired after the 2010 season, then later took a job as a college football analyst with ESPN for a year. He was hired last November to re-kindle the Ohio State program that had suffered through player suspensions and departures, NCAA sanctions and the forced resignation of coach Jim Tressel due to a memorabilia-for-money scandal.

The Buckeyes who were an unheard of 6-7 a year ago.

And after his success at Bowling Green, Utah and Florida, Meyer knows that Buckeye fans are expecting him to make them national contenders again and in a hurry. First they have to get through this season when they aren’t eligible for a bowl.

“There’s no such thing as a buffer year in college football, certainly not at Ohio State and certainly not with myself and our staff and our players,” Meyer said Thursday at the Big Ten media day.

Meyer said he sees a change in the way the Big Ten plays football, at least from watching tape.

“The SEC, the last few years, is kind of the kingpin with the success they’ve had in the BCS. I have watched a lot of the Big Ten as we got ready to play some Bowl games in recent years. I see the Big Ten has changed dramatically,” Meyer said.

“I think it was eight out of the 12 teams are running some sort of spread offense right now. And then there’s two option offenses and then traditional offenses, and that’s obviously a drastic change from historically what you think of the Big Ten. So there’s a little bit of a movement.”

Meyer said his relationship with other coaches in the league is fine, even though there were reports earlier this year Wisconsin coach Bret Bielema wasn’t pleased some of Meyer’s recruiting tactics.

“We have a very, very good relationship. I think you’d have to ask coach, but we get along fine. We had a conversation about it at the Big Ten meetings, I believe it was in February,” Meyer said.

“We stand by exactly the way how we do things. And from my understanding, once again, it hasn’t been discussed again, there’s absolutely no problem whatsoever with the way Ohio State does their business.”

CHICAGO (AP) — Bill O’Brien is looking straight ahead. It’s the only choice he really has at Penn State. The... read more