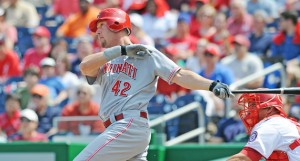 CINCINNATI (AP) — No Joey Votto. No Brandon Phillips. No problem for red-hot Ryan Ludwick and the Cincinnati Reds.

Ludwick homered and drove in four runs for the second consecutive game, and the Reds kept rolling along with a 6-4 win over the San Diego Padres on Wednesday night.

“With Joey out, it’s been different people at different times,” said Ludwick, the former Padre who’s hitting .388 (19 for 49) with six home runs and 20 runs batted in since the All-Star first baseman left the lineup July 16. “Phillips, myself, Zack Cozart, the pitching — everybody’s pitching in. Now, with Phillips out, it’s even more important for everybody to pitch in.”

The Reds remained three games ahead of second-place Pittsburgh in the NL Central. The Pirates open a three-game series in Cincinnati on Friday.

Sean Marshall worked a scoreless seventh and Jonathan Broxton a spotless eighth in his Cincinnati debut after being acquired Tuesday from Kansas City. Aroldis Chapman pitched the ninth for his 23rd save.

“This is a good team here,” said Broxton, who arrived at the ballpark shortly before the first pitch and showed no signs of rust despite not having pitched since July 24. “I’m happy to be a part of it. Going from last place to first is a big jump.”

Chase Headley homered for the Padres, who have lost three of four. They couldn’t capitalize on the absence of Votto and Phillips, who form the right side of Cincinnati’s regular infield.

Votto is on the disabled list following knee surgery, and Phillips sat out with a strained left calf.

San Diego led 4-3 when Drew Stubbs singled with one out in the fifth off Padres starter Kip Wells. Jay Bruce drove in Stubbs with a double down the right-field line. Dale Thayer got Scott Rolen to fly out before Ludwick lined a go-ahead single to right.

This is the Ludwick expected by manager Dusty Baker after the Reds signed him as a free agent in January.

“He’s been an RBI man most of his career,” Baker said. “This is the first time in the last couple of years where he wasn’t traded at the deadline. He’s doing everything in his power to try to find a home.”

San Diego manager Bud Black wishes he’d seen this side of Ludwick when the two were together in San Diego over parts of the last two seasons.

“Ludwick has been hot over the last three weeks, not just this series,” Black said. “He’s really done well. When a hitter’s in a groove like that, he’s going to get his hits.”

Arroyo walked Alexi Amarista on four pitches leading off the game. After Will Venable flied out, Headley hit a 1-0 pitch an estimated 406 feet into the right-field seats for his career-high 13th homer. His previous best was 12 in 2009.

Cozart, who opened Cincinnati’s 6-0 win July 6 in San Diego with a home run off Wells, started the bottom of the first with his 11th homer. Ludwick gave Cincinnati a 3-2 lead by following Rolen’s two-out walk with a drive to left on a 2-0 pitch for his 19th homer and fourth in five games.

“You can tell when the ball is hit whether it got squared enough,” Wells said. “It isn’t just the ballpark. The leadoff hitter got me in San Diego, too, to lead off the game. The ball Ludwick hit well enough as well. Ludwick hit a mistake, but he’s in a groove right now and he’s hot. If there’s anybody you don’t want to beat you right now, it’s him. If you put them in a hitter’s count or make a bad pitch, they are going to hit it more often than not.”

San Diego took a 4-3 lead with a two-run fourth, stringing together consecutive two-out singles by Wells, Amarista, Venable and Headley.

“It was a battle, back-and-forth for a while,” Arroyo said. “That’s the way it’s been the whole series. It was nice to come out with a win tonight.”

Wells (2-4) spent 10 games with the Reds in 2009, his last major league appearances before this season. He allowed five runs and five hits with four walks in 4 1-3 innings.

NOTES: Phillips’ replacement, Wilson Valdez, left after four innings with a stiff neck. … The Reds placed suspended C Devin Mesoraco on the seven-day concussion disabled list. They also optioned RHP Todd Redmond to Triple-A Louisville and called up C Dioner Navarro from their top farm club. Mesoraco was injured Monday before being ejected for arguing balls and strikes with plate umpire Chad Fairchild. Mesoraco was suspended for three games and fined by Major League Baseball on Wednesday for poking a finger at Fairchild’s chest protector and bumping him. Mesoraco is appealing the suspension.