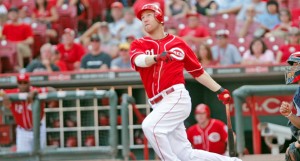 Cincinnati’s Todd Frazier hit a two-run homer in a six-run second inning and the Reds went on to beat the San Diego Padres 9-4 on Thursday. (Courtesy of the Cincinnati Reds)

CINCINNATI (AP) — Todd Frazier and the Cincinnati Reds geared up for their big weekend series against the Pittsburgh Pirates — yes, the Pirates — by pounding the San Diego Padres.

Frazier hit a two-run homer in a six-run second inning and Johnny Cueto overcame a pair of rare long balls to pitch into the eighth inning Thursday, leading the surging Reds to their 13th win in 14 games, 9-4 over the Padres.

“You want to have big innings every game,” Frazier said. “We had the big six-run second, and everybody contributed. We batted around.”

The Reds scored a combined 35 runs while taking three of four from San Diego and have won 20 of 23. They are 14-3 since All-Star first baseman Joey Votto left the lineup with a knee injury that required surgery and have won two straight since star second baseman Brandon Phillips was sidelined with a strained left calf.

Reds manager Dusty Baker was relieved the offense picked it up.

“We needed it,” he said. “(The Padres) scored a lot of runs. They came in here swinging the bats good. You do what you need to do to score at least one more run than them.”

Cueto (14-5), who gave up home runs for the first time in more than two months, allowed eight hits and four runs with one walk. He also tied his season high with nine strikeouts in 7 1-3 innings while winning his career-high fifth consecutive start. He was hurt by leaving a couple of breaking balls up, catcher Ryan Hanigan said.

“He pitched well,” Hanigan said. “He wasn’t as dominant as he can be, but he did a good job managing the game.”

Cincinnati opened a 3 1/2 game lead over idle Pittsburgh in the NL Central heading into a three-game weekend series between the two teams that is scheduled to start Friday.

“It was amazing,” Rodriguez said. “It was everything, more than I expected. The goal at the end is to get a ‘W’ but it was a great experience, something that I will remember for the rest of my life.”

The Reds chased Padres starter Ross Ohlendorf while sending 12 batters to the plate during a six-hit, six-run second inning. Rolen started it with an infield hit. Frazier followed with his 13th homer and second in three games, a 408-foot drive into the left field seats.

Hanigan added an RBI double and Bruce had a bases-loaded, two-run single. Ohlendorf (3-2) also was called for a run-scoring balk before leaving after just 1 2-3 innings, the shortest outing by a San Diego starter this season.

Rodriguez, a former Reds minor leaguer who also has played in independent leagues, smacked a 1-2 pitch 416 feet into the left field seats for the first home run allowed by Cueto in 80 innings — the longest stretch in the majors this season — over 11 starts since Colorado’s Todd Helton homered on May 25 in Cincinnati. The homer was the first by a right-hander allowed by Cueto since Washington’s Ryan Zimmerman hit one on Aug. 17, 2011, a span of 169 innings.

Chase Headley cut Cincinnati’s lead in half with a two-run single later in the inning, and Cameron Maybin added his sixth homer, a 423-foot solo shot to left with one out in the fourth inning. But the Reds increased their lead to 8-4 on RBI singles by Rolen and Zack Cozart in the bottom of the inning.

“I like the way we swung the bats,” he said. “We’ve got to get to that point that we put pressure on the opposition every inning. That’s every team’s challenge. I do like the fact that, when we’ve gotten behind, we do come back. We have to sustain innings to score some runs, but there was the other end. Cueto is 14-5 for a reason.”

NOTES: The two teams combined to scored 52 runs in the four-game series. … For the second time in four games, the Padres set a season high for hits and runs allowed in one inning. They gave up five of each in the third inning of Tuesday’s game they ended up losing 7-6. … San Diego went 3-7 on their fourth road trip of 10 or more games this season. The Padres open a six-game homestand Friday with the first of three against the Mets. … Reds RHP Nick Masset was scheduled to pitch an inning for Class-A Dayton during a rehab assignment. Masset has been on the disabled list since spring training with a sprained right shoulder.

Haslam buys Browns for reported $1.1B

The Associated Press   Here’s one to make Cleveland fans shake their heads: A partial owner of the hated Pittsburgh... read more