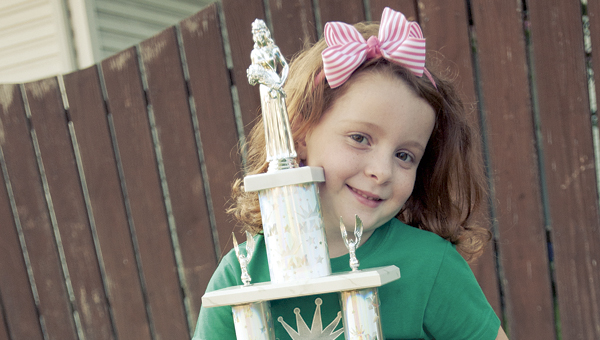 In the living room of her north Ironton home, Emma Triplett practiced her walk.

Hands by her side and a smile from ear to ear, the 6-year-old made sure to give eye contact to her “judges.”

Last week, Emma did that walk for real at the National American Miss Ohio Princess competition. Out of about 200 young girls, Emma took first runner up, which was just fine with her.

“It was really fun, and I got those roses up there,” she said, pointing at the vase on the mantle in the living room.

Emma was also awarded trophies, which she proudly displayed.

“This is my first big one,” she said, referring to the tallest of the three trophies, awarded to her for being the first runner up.

She also won a trophy for taking third place in casual wear, got a participation trophy and several ribbons.

Emma’s mother, Melissa, was also proud of her daughter’s accomplishment.

“Mom screamed so loud (when they called my name), everybody looked at her,” Emma said.

Melissa admitted she was surprised Emma won first runner up at her first major event.

“I just wanted her to gain experience,” Melissa said. “I wasn’t expecting much.”

Several months ago Emma was invited to an open call in Cincinnati, where she had a photo shoot and interview to qualify for the statewide pageant, which was in Columbus July 27-28.

Although the NAM competition was Emma’s first major pageant, she also competed at Ashland, Ky.’s, Poage Landing Days last summer and at a show in Coal Grove where she won the Queen title. She also participated in a pageant sponsored by Glitters at the Coal Grove Family Fun Days last month.

She will also enter the Poage Landing Days pageant this September as well.

Unlike the children on the reality TV series, “Toddlers and Tiaras,” Melissa said she isn’t emphasizing the need for makeup and fake tans. During the NAM pageant, participants are prohibited from wearing any makeup, she said.

Melissa said Emma also still likes to play outside and climb trees, be a kid. But, if she keeps her interest in pageantry, the family will continue to support her.

“She likes to get attention,” Melissa said. “As long as she is in to it, we’ll do what we can. This is all her asking to do it.”