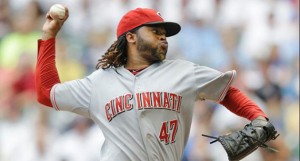 Cincinnati’s Johnny Cueto pitched seven solid innings but got little run support as he suffered his sixth loss of the season and the Reds lost 3-1 to the Milwaukee Brewers on Tuesday. (Courtesy of the Cincinnati Reds)

MILWAUKEE (AP) — Despite watching his team lose its third straight game on Tuesday night, Cincinnati Reds manager Dusty Baker was feeling confident it was only a temporary setback for his NL Central-leading team.

That’s because the Reds ran into a hot pitcher in Mike Fiers of the Milwaukee Brewers and Baker knew there was not much his hitters could do against him.

Fiers took a perfect game into the seventh inning to lead the Brewers to a 3-1 win over the Reds.

The Reds have lost three straight for the first time since July 2-5, but still lead the NL Central by 3 1-2 games over second-place Pittsburgh.

“The problem was their pitcher,” Baker said. “He pitched a great game. That’s one of the best games pitched against us in a long time.”

Baker said he was confident his team could quickly turn it around. Before its current losing streak, the Reds had won 22 of 25 games.

“We’ll get it together and make another nice run,” he said.

Johnny Cueto (14-6) pitched seven innings for the Reds, giving up three runs and six hits while striking out nine. He was trying to become the first NL pitcher to reach 15 wins this season.

“You’ve got to give him (Fiers) credit,” Cueto said through an interpreter. “I pitched well, but it went in his favor tonight.”

Fiers (6-4) retired the first 18 batters before Zack Cozart doubled to left-center leading off the seventh. He advanced to third on a fly ball and scored on Brandon Phillips’ sacrifice fly.

“The pitch I hit was a cutter,” Cozart said. “He had his stuff working tonight. Just when you thought you’d get a fastball, he’d throw you something else.”

The only other hits Fiers gave up were eighth-inning singles to Xavier Paul and Ryan Hanigan. The right-hander struck out pinch-hitter Ryan Ludwick to get out of the inning and left the field to a standing ovation.

Fiers said he was aware he was throwing a no-hitter, but stayed focus as his team was only leading by two runs at the time.

“Every start I go out there I don’t want to give up a hit, but when it got into the sixth and seventh inning, thoughts came into my mind even more,” he said. “I’m just trying to put zeroes on the board, no matter if they get 10 hits or zero hits. I just tried to keep my cool and not think about it.”

The Brewers grabbed a 2-0 lead in the first inning on Aramis Ramirez’s 15th home run, a 425-foot shot to the Milwaukee bullpen in left-center. It was the second consecutive game in which Ramirez hit a home run against the Reds.

Jean Segura’s RBI groundout in the seventh increased the lead to 3-1. It was Segura’s first career RBI.

NOTES: Baker said 1B Joey Votto would not be activated from the DL on the team’s current seven-game road trip, which ends Sunday in Chicago. Votto had arthroscopic surgery on the knee on July 17. … Brewers RHP Shaun Marcum, on the DL since June 15 with right elbow tightness, will make a rehabilitation start Thursday with Class-A Wisconsin. … The series concludes Wednesday when the Reds send Mat Latos (10-3) to the mound against Randy Wolf (3-8).