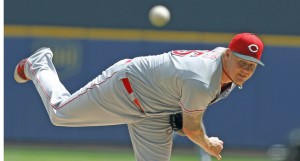 MILWAUKEE (AP) — Mat Latos was dominant for seven innings. Then the Reds just couldn’t catch a break in eighth.

Ryan Braun snapped a 0-for-18 slump with a two-out RBI double in the eighth inning, lifting the Milwaukee Brewers to a three-game sweep with a 3-2 win Wednesday over the Reds.

“That’s a tough one to lose right there, especially when they have to get two two-out hits to win,” Reds manager Dusty Baker said.

But that’s just what the Brewers did against Jonathan Broxton (1-1), who started the eighth in relief of Latos.

With the Reds leading 2-1, Broxton quickly retired the first two batters before an infield single by Norichka Aoki. With Carlos Gomez up to bat, Aoki stole second and took third on catcher Dioner Navarro’s throwing error. Gomez hit a soft liner that just got over the outstretched glove of shortstop Wilson Valdez and Aoki scored to tie the game.

Gomez stole second and Braun followed with a hit that fell in front of the Reds center fielder.

“I hung a pitch to Gomez and broke his bat. Then Braun I broke his bat,” Broxton said. “He hit it right to where nobody can get to it. Three of them were well placed balls they hit.”

Baker chose to pitch to Braun, who was hitless in all three games, instead of Aramis Ramirez.

“You’re in a situation where you’ve got to face Braun or Aramis Ramirez,” Baker said. “Aramis is one of the hottest hitters in baseball right now. So we chose to pitch to Braun and he blooped it in front of (Chris) Heisey out there.”

Broxton had given up only three hits and no earned runs in his last four outings.

“Brox has been throwing the ball so well,” Baker said.

Braun, came in batting .304, but had struggled at the plate in the three-game series against the St. Louis Cardinals and was hitless against Cincinnati. Ramirez has seen his batting average climb to .295 and leads the NL in extra base hits (54) and doubles (37.

“There aren’t too many better ways than to help your team win a game,” Braun said. “Certainly not the first time I’ve struggled; it won’t be the last. But it’s never enjoyable when you go through something like that. It’s always nice to get a hit. It’s that much more enjoyable when it happens in a victory and a big situation.

The Brewers’ rally cost Latos a chance at his fourth consecutive victory.

“Latos threw a great ball game,” Baker said. “He had had enough. He was spent at that time.”

Latos retired 16 of the first 19 batters he faced before surrendering Gomez’s solo shot in the sixth. He regrouped and retired the next five. Latos allowed three hits, one walk and had eight strikeouts over seven innings. He’s now allowed one earned run and seven hits in his last two starts, a span of 14 1-3 innings.

Latos knew that the team has a great bullpen, but finishing the game was a thought, too.

“I felt all right, but I figured we had a good bullpen,” Latos said after throwing 97 pitches, 67 for strikes. “We have fresh arms in the bullpen. They’d come in and get the job done.”

John Axford (4-6) pitched the eighth for the win and Jim Henderson got his second career save in as many days. Dioner Navarro hit a two-run homer in the third off Milwaukee starter Randy Wolf.

Miguel Cairo led off with a walk before Navarro collected his first hit in six at-bats since being promoted from Triple-A Louisville on Aug. 1. He replaced fellow catcher Devin Mesoraco, who went on the seven-day concussion disabled list.

Wolf came in 11-4 against the Reds, his second-most career wins against any opponent, but his mistake to Navarro cost him. The left-hander, who has only one win in his last eight decisions, lost his third consecutive start.

Cincinnati had a big chance to pad the lead in the fifth, but came up empty on a great play by Brewers third baseman Aramis Ramirez. The bases were loaded and two outs when Navarro hit a hard grounder that Ramirez snared with a diving stab and then threw from his knees to end the threat.

“One of the keys to the ball game was in the sixth inning,” Baker said. “We had the bases loaded and one out and didn’t get anything. Then Aramis saved them. That ball down the line that’s at least two runs. That shows the importance of defense and it’s a game of inches.”

It was Milwaukee’s third consecutive win over Cincinnati and sixth straight victory at home.

NOTES: The Reds were swept for only the second time this season. The first was at Cleveland, June 18-20. … Broxton made his fourth appearance as a Red. … Baker said that Mesoraco would probably catch two of the upcoming four games at Chicago. … Jean Segura’s infield single in the Brewers fifth was the rookie’s first hit. He was recalled from Double-A Huntsville and made his major-league debut at shortstop on Monday. He was acquired from the Los Angeles Angels along with two minor-league pitchers for Zack Greinke on July 27.

LONDON (AP) — Allyson Felix grinned as she waited for the official results to pop up on the scoreboard. She... read more