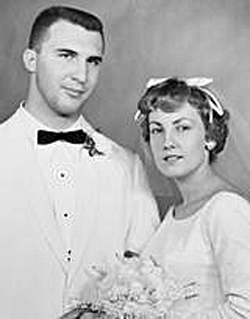 The maid of honor was the bride’s aunt Betty and the best man was the groom’s brother-in-law Tony Scherer.

Woody was a junior at The Ohio State University on a football scholarship under coach Woody Hayes and was later employed after graduation by General Motors/Delco Remy, where he retired after 35 years. Stephanie attended St. Mary’s School of Nursing with William’s mother and served as a nurse at Community Hospital/Anderson, retiring after 20 years.

They celebrated with a special dinner with family and friends. Woody and Stephanie are blessed with three children (twins Christopher and Jennifer, and Patrick), their families and five grandchildren, who reside in Indiana.

Amanda Massie of Ironton and Aaron Woodyard of Willow Wood announce their engagement and forthcoming marriage. Amanda is the granddaughter... read more