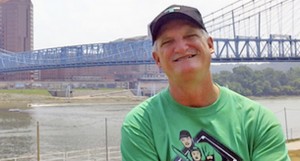 Mike Sharp — a graduate of Ironton St. Joseph — wrote the words for the song “Touch ‘Em All.” The song and video premiered at the CIncinnati Reds' Hall of Fame museum. (Photo Submitted)

When a batter hits a home run, he runs the bases and he will “touch ’em all.”

So it stood to reason that when Mike Sharp hit a home run with his lyrics for a baseball song that he appropriately name it “Touch ‘Em All.”

Seven years ago Sharp was coaching his daughter Hannah’s tee-ball team and, while watching a Cincinnati Reds’ game, he decided to write a father/son/daughter feel good song. He sent the song to a couple of people but it pitched a shutout.

Then came a break about three years ago.

While listening to sports radio he hears the song “Paint The Town Red” as part of the team’s hot stove show. A caller complained about the song and Reds’ chief operating officer Phil Castellini challenged listeners to come up with a better song.

With encouragement from Forgus and Castellini to move forward with the song and then talking with Athens’ native Rick Walls who was the director of the Reds’ Hall of Fame, Sharp searched for a band.

A radiologist at O’Bleness Hospital in Athens, Sharp got an Ohio University band to try and play the song and he contacted the Ohio school of film to do a video.

The final product struck out with Sharp.

“I was at a memorial service in Cincinnati and I asked some relatives if they knew of any bands in Cincinnati,” said Sharp.

He was directed to the band One Horse that was comprised of Pete Adams, Ryan Hawkins, Matt Ahrens and his own cousin, Nick Allen.

Sharp had written the song as a country tune and the band laughed. They pulled out their electric guitars and finished 85 percent of the song that night.

With the song in hand, the group contacted famed producer Erwin Musper who had opened a studio in Northern Kentucky. Musper has worked with such music artists as Elton John, Van Halen, Bon Jovi and Mick Jagger.

Soon, everything fell into place.

Walls got Sharp hooked up with video expert Cam Miller who does all the work for the Reds’ Hall of Fame. Miller set up the website www.baseballtouchemall.com that includes the history of the song, the video, photos and — of course — the song.

“I talked to Rick several times over the past two years and asked about using the Hall of Fame for our premiere. He talked to Cam about the video and we set it up, which Cam said was very rare,” said Sharp who wrote the video story.

“We filmed the backyard scene at Devou Park in Covington, Ky., using all family members. We filmed the high school scene at Crosley Field in Blue Ash using two local teams from Sycamore and Lakota. Cam also did a one-minute trailer.”

The video debuted in the Hall of Fame theater to a packed house.

“It was an awesome experience and a dream come true,” said Sharp.

The song itself is considered a “life” song. It deals with passing things on to your children. Sharp wrote in his dedication, “You never know how far your dreams may take you.”

“I also wanted to end the message with whatever you enjoy in life, pass it on to your kids and they will pass it on to their children.”

The video had some unique items. First base was his old high school glove and the shoebox lid used for second base had the number 75 on it, honoring Unger’s Shoes, which hase been in business for 75 years in Ironton.

In the final scene the family walks off with numbers on the back of their shirts that had special significance. The number 17 was for Sharp’s grandfather Pat Delaney. Since he was Irish, it reflected St. Patrick’s Day.

The number 3 was for Delaney’s wife who died when Sharp was 3-years old. The number 31 was for Delaney and his twin brother Jim who were born Jan. 31, 1902. And the number 6 was for one of Jim’s children who had died of cancer.

“The dream took me three years, but after I found the right band, it only took 14 months to complete my dream,” said Sharp. “Never give up if you believe in your dream.”

For Mike Sharp, his dream turned into a grand slam. And now he has good reason to Touch ’Em All.