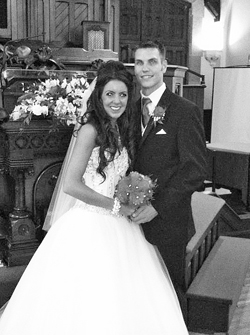 Brittany England of Proctorville and Nicholas Snell of Newcomerstown were married at 5:30 p.m. Aug. 4 at First Presbyterian Church of Ironton.

The bride is the daughter of Pamela and Daniel Bryan and Scott England of Proctorville. She is the granddaughter of Geneva and Roger Burge and Juanita and the late Terry England. She graduated with a bachelor’s degree in political science and a minor in women’s studies from The Ohio State University and is now attending Florida Coastal School of Law.

The groom is the son of Sally and Terry Snell of Newcomerstown. He is the grandson of the late Veronica and Robert Gay and Rolland and the late Barbara Snell. He graduated from ITT Technical Institute with a degree in visual communications and is in sales with Comcast.

The wedding colors were black and red with red and white roses. The Rev. Timothy Burge officiated. Music was provided by Terry Bradshaw. Reception was held at the Elks in Ironton, with Chuck Black as DJ. The couple resides in Jacksonville, Fla.

Meagan Hairston of Ironton and Joshua Joseph of Pedro were married at 7:30 p.m. June 2, 2012, at Smathers Beach... read more