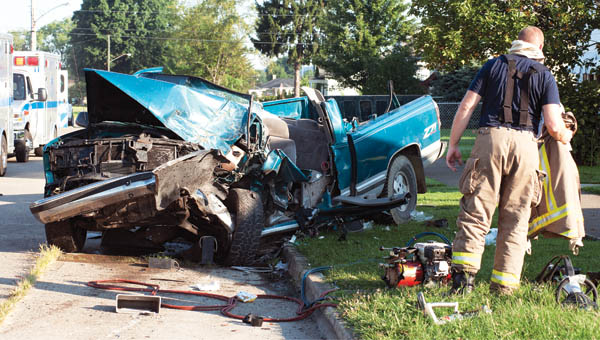 Ironton Firefighter Johnny Leach looks over a smashed up GMC pick-up truck before he starts to pack up gear after helping to extricate an accident victim early Sunday morning.

The Ironton Police Department is investigating a motor vehicle crash Sunday that damaged three parked vehicles and resulted the death of the 16-year-old driver.

Police are withholding the juvenile’s name pending notification of family.

“Through our investigation officers were able to determine a 1995 GMC pick-up truck was northbound in the 2400 block of South Eighth Street when it lost control and struck a parked vehicle, knocking that vehicle into a yard,” Ironton Police Capt. Chris Bowman said in a prepared statement.

The 16-year-old was taken to the St. Mary’s Medical Center Ironton Campus where he was pronounced dead.

The Ohio State Highway Patrol, Ironton Fire Department and the Lawrence County Emergency Medical Services all assisted in the incident.

Bowman said the police have not yet confirmed that one or more passengers were in the truck at the time of the accident and fled the scene immediately afterward.

CHESAPEAKE — A South Point man is dead after his motorcycle went off the road. Paul D. Watters, 56, died... read more