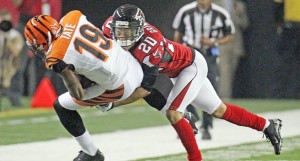 Cincinnati Bengals wide receiver Brandon Tate makes a first down catch and then pays the price with a hit from Atlanta Falcons cornerback Brent Grimes during 1st-half action at the Georgia Dome in Atlanta, Ga., on Thursday. (MCT Direct Photos)

“It’s not holding me back,” he said. “It’s not changing the way I play the game. They can say whatever they want. As long as we win games, as long as I’m getting completions to my guys, I’m not worried about it.”

Dalton and Falcons quarterback Matt Ryan each directed a pair of scoring drives before Cincinnati’s reserves held on for a 24-19 preseason victory over Atlanta on Thursday night.

In a matchup of teams that lost in the wild-card round of the playoffs last season, Cincinnati (No. 14 in the AP Pro32) had the deeper roster.

The second- and third-string players for Atlanta (No. 13) struggled in the second half for the second straight week.

Ryan, who completed his first 11 attempts, finished 18 of 21 for 174 yards and one touchdown, a 2-yard screen pass to reserve fullback Lousaka Polite in the second quarter.

Dalton was 8 of 14 for 125 yards and one TD, a 50-yard pass that star receiver A.J. Green caught while running past cornerback Asante Samuel down the right sideline.

It was just the kind of preseason result that Cincinnati offensive coordinator Jay Gruden has been hoping for. Gruden’s training camp emphasis for Dalton has been to improve accuracy on deep balls.

“I’m surprised they left A.J. one-on-one in that situation,” Dalton said, “but I’m glad they did.”

Bengals tight end Jermaine Gresham limped off the field in the first quarter with a right knee injury. After the game, Bengals coach Marvin Lewis said, “He’s going to be fine.”

Cincinnati’s offense began the night with starting running back BenJarvus Green-Ellis out with a foot injury and his top backup, Bernard Scott, sidelined by a sore hand.

Atlanta’s Michael Turner had three carries for minus-3 yards. Turner’s best gain was an 8-yard completion on a screen pass.

Falcons coach Mike Smith wasn’t concerned about Turner’s lack of production because the plan was for Ryan to air out the passing game and spread the ball around.

“We really wanted to look at the passing game,” Smith said. “It was more so of an emphasis of what we wanted to do. There were some nice opportunities.”

Samuel, the veteran Atlanta acquired in an April trade with Philadelphia, seemed to celebrate prematurely after his coverage contributed to a short incompletion that Dalton threw too high for Green.

On the next snap, Green ran straight ahead on a “go” route and easily beat Samuel with a double move to make an over-the-shoulder catch that put the Bengals up 10-3.

“He sat on the route before, and I got him on the double move,” Green said. “Yeah, we took advantage of that. We got to go over the top on him.”

Samuel accepted the blame for blowing a third-and-15 situation and letting Green score.

“We were going at it,” Samuel said. “I relaxed on the deep ball a little bit, and he got over on top of me. It was third-and-long, so it was time to put the ball up.”

Ryan answered with a nine-play, 88-yard drive that ended with a 2-yard TD catch by Polite. An over-the-middle pass on the previous snap to Jones, last year’s No. 6 overall draft pick, covered 23 yards.

“I’m just trying to make good decisions and be accurate with the football,” Ryan said. “We have really talented wide receivers and tight ends. My job is to try to get them the ball in a good spot to make a play with.”

The game was tied 10-all when Ryan and Dalton left the game late in the second quarter.

Chris Redman took over for Atlanta, directing a nine-play drive that ended with Matt Bryant’s 22-yard field goal and gave the Falcons a 13-10 halftime lead.

Bruce Gradkowski, the Bengals’ No. 2 quarterback, helped Cincinnati take a 17-13 lead early in the third on a 12-yard touchdown pass to rookie Mohamed Sanu.

Mike Nugent kicked a 54-yard field goal to give the Bengals a 3-0 lead on the fourth drive of the game. Bryant tied it at 3-all with a 20-yarder early in the second quarter.

Atlanta safeties Thomas DeCoud and William Moore combined to force and recover a fumble from running back Brian Leonard on Cincinnati’s first possession, but the Falcons followed with a three-and-out.

In the fourth quarter, Jourdan Brooks’ 1-yard touchdown run gave the Bengals a 24-13 lead. Atlanta made it 24-19 late in the fourth when LaMark Brown caught a 7-yard TD pass from Dominique Davis. The Falcons’ 2-point conversion pass failed.

Before Atlanta (0-2) visits Miami for a preseason game next week, Smith said the Falcons will focus harder on avoiding penalties. Over the past two games, they have combined for 21 penalties for 242 yards.

“Our execution was crisp overall and of course the pass from Andy to A.J. was good,” Lewis said of his team’s first-half performance. “But we also had two dropped balls. You can never let that get into your program. Defensively, we got a couple of tipped balls, which was good, but you’ve got to come down with those and get the turnovers.”

CINCINNATI (AP) — Just when it seemed the Cincinnati Reds were headed for a big roll, they got a little... read more