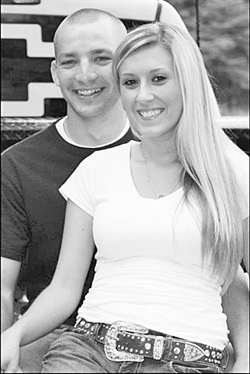 Shelby Shope of Pedro and Jesse Graybeal of Scottown were married at 5:30 p.m. Aug. 18, 2012, at Freedom Baptist Church in Kitts Hill.

The bride is the daughter of Vineta and Greg Shope of Pedro. She is the granddaughter of Mina and the late Ercell Hamilton and Thelma and the late Carl Shope. She studied at Ohio University Southern School of Nursing.

The groom is the son of Jane and Bill Graybeal of Scottown. He is the grandson of Carl and the late Joyce Davis. He is an electrician and studied at Cabell County Career and Technical Center.

Authorities searching area for white male suspect   SOUTH POINT — An armed robber got away with an undetermined amount... read more