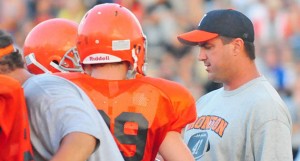 A new era is set to begin, but Mark Vass prefers to think of a new season is about to start.

While Vass begins his first season as the Ironton Fighting Tigers’ head football coach after four decades under Bob Lutz, he said the most important thing on his mind is Friday night’s game on the road against the Wheelersburg Pirates.

“First of all, this isn’t about me. This is about Ironton and Wheelersburg. This is a big game against a very good team. It’s on the road and they have a new facility with turf so they are going to be extra juiced,” said Vass.

Leading the way for the Pirates will be junior receiver and running back Dylan Miller (6-4, 180) and junior quarterback Eddie Miller (6-1, 165).

“They like to spread it out and utilize their skilled players,” said Vass. “They’ll mix it up and try to keep you off-balance.”

One thing that concerns Vass is the inexperience of his team versus the experience of the Pirates. Ironton will still operate out of the T-formation used by Lutz, but Vass has added some spread and shotgun formations as well.

“It’s new for us, so execution is the key. We’ve only worked on our offense for a few weeks and they’ve been using the same offense for several years and they have experienced personnel to run it,” said Vass.

Much of the pre-game talk has centered around the offenses, but the real pressure will be on the defenses.

Both teams use a 50 alignment although Vass said there are some distinct differences.

“Wheelersburg has five or six players back on defense and we have just two. They like to use some smaller guys with a lot of quickness to disrupt your offense and they have some good athletes with speed in the secondary who come up and make plays. We’ll have a tough time moving the ball and we can’t afford to turn the ball over,” said Vass.