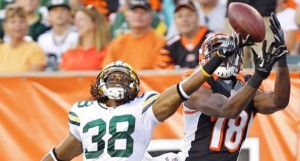 Former Bengals’ running back Cedric Benson (32) tries to run through the tackle of Cincinnati’s Michael Johnson. (The Ironton Tribune / Courtesy The Cincinnati Bengals)

CINCINNATI (AP) — Aaron Rodgers was the best running back on the field.

The MVP quarterback led Green Bay to a big first half Thursday night, running for 52 yards and two touchdowns during a 27-13 preseason victory over the Cincinnati Bengals, who simply couldn’t catch him.

Rodgers avoided the rush and took off, finishing as the game’s top rusher.

“l always joke around with him about being a running back, showing his running back skills,” running back Cedric Benson said. “He’s got speed on those rollouts and that’s very helpful.”

No surprise to Rodgers, who ran for three touchdowns last season while setting a club record with 45 touchdown passes.

“I think I’ve showed it in the past,” Rodgers said.

The Packers (No. 1 in the AP Pro32) wanted to look crisp coming off a drubbing by Cleveland. Rodgers led the way, going 12 of 22 for 154 yards with an interception while leading the Packers to 245 yards and a 17-6 halftime lead. He scrambled six times, scoring on runs of 12 and 5 yards.

“We couldn’t keep the quarterback from extending drives and scoring,” Bengals coach Marvin Lewis said. “We didn’t do a good job of recognizing a mobile quarterback and getting him down and strapping him to the ground.”

Rodgers made only one mistake, throwing an interception on a mix-up with a receiver.

“We were flat in the first half,” said Bengals cornerback Terence Newman, who had the interception. “We didn’t do anything.”

While Rodgers was the top runner on the field, Benson was the last to leave it. The former Bengal made his Packers debut and ran six times for 38 years.

Benson led the Bengals (No. 14) in rushing each of the last four years, but they decided to let him leave as a free agent and signed BenJarvus Green-Ellis.

Benson stuck around after the game and enjoyed his homecoming, meeting former teammates, coaches and acquaintances at midfield before jogging off long after everyone else had left. His Bengals jersey is on a clearance rack at Paul Brown Stadium’s gift shop.

“Ced was great,” Rodgers said. “He’s getting his feet wet. He made some runs out of nothing and did a nice job on some check-downs. It was a good start for him. We’re excited to have him.”

Benson signed with the Packers (1-2) on Aug. 14 and has been learning the play book, doing extra study time with the quarterbacks to pick things up. He got into a preseason game for the first time and gained 8 yards on a carry up the middle, receiving a mixed reaction from the crowd of 52,584.

“It felt good,” Benson said. “I was joking around earlier that I’ve only been here a week and a half and I’m playing the first half of the game. Truly, honestly, it felt like I haven’t had a lot of time off.”

The Bengals (2-1) played their starters into the third quarter but they couldn’t get a touchdown, failing even on a first-and-goal from the 1-yard line. Andy Dalton played the entire first half and the opening series of the third quarter, going 5 of 17 for 40 yards and two sacks. He scrambled three times for 36 yards.

Cincinnati settled for field goals of 42 and 30 yards by Mike Nugent, the second coming after the Bengals had a first-and-goal from the 1. Dalton had to throw away a pass under pressure, a run went nowhere, and Dalton was sacked by Erik Walden, forcing the Bengals to settle for the field goal.

One of the Packers’ main concerns was how the offense did when Rodgers left the game. Backup Graham Harrell has struggled in the preseason, throwing two interceptions. He opened the second half and had a hand in another turnover.

The Packers fumbled at their 15-yard line when Harrell and John Kuhn failed to have a clean handoff. No. 2 quarterback Bruce Gradkowski threw for a touchdown on the next play.

Cincinnati sat five of its reserve cornerbacks because of injuries, including top draft pick Dre Kirkpatrick, who has missed all three preseason games while recovering from an injured left knee.