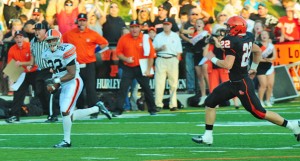 WHEELERSBURG — What a start.

The Ironton Fighting Tigers’ began their season and the Mark Vass coaching era with quite a bang as they went on to beat the Wheelersburg Pirates 32-27 on Friday.

He later scooped up a fumble and ran it back 65 yards for a score that put Ironton up 14-0 with just under 10 minutes left in the first quarter.

“Those were big plays. They came right back after us. It was a good little battle. We were pleased to come out with a win,” said Vass.

“It really was a team effort. Patrick had some big plays early, we had some injuries and we were scrambling and playing a lot of backups, especially on defense. You don’t execute as well when your backups are forced to play.”

Wheelersburg used its spread offense to generate 390 total yards. Quarterback Eddie Miller kept the Pirates in the game by himself as he threw a steady diet of hitches and screens, completing 22 of 30 passes for 201 yards with a touchdown and an interception.

“We knew (Miller) was a good ballplayer. In the no-huddle they spread you out and they crack-back block and that’s tough. With the no-huddle you can’t get the calls you want. They did a good job with their offense,” said Vass.

After Ironton went up 14-0 without running an offensive play,

The Pirates rebounded and went 76 yards in 10 plays with Miller running the final 18 yards for the score. Keith Thurmer kicked the conversion.

Ironton answered with a drive to the Pirates 29 before it stalled on downs. Wheelersburg then went 65 yards in nine plays. Miller again capped the drive with a 9-yard run and the game was tied with 11:06 left in the half.

Another Ironton drive fizzled at the Pirates 22, but Drew Wells came up with an interception to give the ball back to the Fighting Tigers at the 38.

After five running plays, Tanner Dutey hit a wide-open Wells behind the secondary on a 45-yard scoring pass and it was 20-14 with 4:39 on the clock.

“Drew made a big catch and that was a momentum changer,” said Vass.

The Pirates marched to the Ironton 7-yard line but the defense stiffened and a 29-yard field goal attempt by Keith Thurmer was wide right and short.

The Pirates took the second half kickoff and got to the Ironton 26 before Trevor White and Devon Guy sandwiched tight end Ross Pyles causing a fumble that was recovered by Jacob Friend at the 22.

Ironton then went on an 18-play drive with Tanner Schweickart scored on a 1-yard run. Schweickart carried nine times in the drive and finished the game with 98 yards on 22 attempts.

“Tanner is a tough nut and he’s all about effort. They’re putting 11 guys up in the box and sooner or later you hope to break one and we did,” said Vass.

After an exchange of punts, the Pirates used a 38-yard run by Austin Gifford to set up a 5-yard scoring run by Miller that made it 26-21.

Again Ironton answered with another long, time-consuming drive that covered 71 yards in nine plays. White went the final 2 yards for the touchdown with 3:12 left.

The Pirates wouldn’t quit as they marched 71 yards in seven plays to get within 32-27 with 1:19 to play. Miller hit Dylan Miller with a 10-yard scoring pass to end the drive.

But on the ensuing onside kickoff, Brad Pierce covered the ball and Ironton ran out the clock.

Vass was happy to get a road win in a hostile environment.

“I told them they’ve have been a team and they handled adversity. I’m really proud of them,” said Vass.

Coal Grove’s Kyle Estep (34) drags a Meigs’ defender as he gains some yardage in the Hornets 24-6 season-opening win... read more