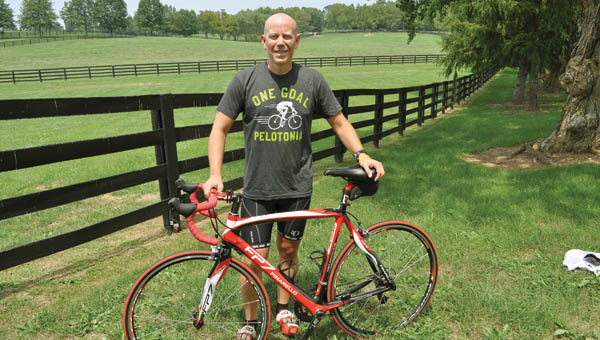 Four years ago, David Lutz joined the Pelotonia cause due to his sister’s near-deadly dance with cancer. Recent events gave him even more motivation to lose himself in this benevolent cause.

By Billy Bruce | For The Tribune

David Lutz is pedalling for One Goal and he would like us all to take notice.

The 1978 Ironton High School grad recently participated in the fourth annual Pelotonia in Columbus, a bicycling event themed One Goal aimed at raising funds to stamp out cancer.

The 180-mile two-day ride, held on Aug. 11 and 12, stretched from Columbus to Kenyon College in Gambier, and then back to New Albany. Roughly 6,200 participants from scores of different states participated.

Counting this year’s ride, which despite its infancy has become the largest biking fundraiser in the U.S., nearly $40 million has been raised by Pelotonia to fund research to cure one of the deadliest ailment known to humankind.

According to David’s research, two of every three males and one of every two females will experience some type of cancer in his or her lifetimes.

He knows first-hand the devastating effects cancer inflicts on individuals and families. His sister, Ironton’s Sarabeth Parker, is a brain cancer survivor. Thanks to research and cutting-edge technology, she survived and has been in remission for more than a decade.

Four years ago, the avid cyclist joined the Pelotonia cause due to his sister’s near-deadly dance with cancer. Recent events gave him even more motivation to lose himself in this benevolent cause.

David, 52, is a member of Bluegrass Cycling Club in his current home of Lexington, Ky. Each year, the rider in this club who accumulates the most miles is crowned club champion. In 2011, a 63-year-old Japanese-born rider named Masaki “Toshie” Tashima won the title.

“He was in the best shape, particularly as a 63-year-old, of anyone,” David said of the man whom at that time was merely an acquaintance.

Early in 2012, Toshie began to experience severe stomach cramps and consulted a physician. Ultimately, due to an advanced cancer diagnosis, his stomach was removed. David, a retired software implentation specialist, realized the Tashimas would need help, particularly since they owned and operated their own local business, and volunteered to help out by caring for Toshie in the Tashima home.

“The first day I showed up, he came to the door in Sponge Bob pants with a big smile,” David recalled, noting this was his first indicator of the inner strength of his soon-to-be best friend.

During the next five months, Toshie relayed stories about his upbringing in Nagasaki that brought perspective to David’s life.

“My family provided, but I only had two baseball gloves (during his childhood),” David said, leading toward the perspectives he learned from his new friend.

“Toshie told me stories about his childhood…one was about fish that had been cleaned and the bones (and other leftovers) were tossed into a bucket. His mother would take those buckets home and make soup.”

“What could I say to that?” he sheepishly questioned. “I felt sorry for myself because I only had two baseball gloves.”

On June 14, just a few months after his cancer was found, Toshie left this world. But a healthy respect for his perspectives remained.

“He never complained about cancer,” David said. “It really makes you think; If there was ever a guy who could complain it was him, but he never did.”

Toshie’s death inspired David’s wife, Linda, to pedal up and join her husband’s passion to ride. Working her bicycle training into her busy professional life (Linda is a high-level consultant for a major software planning company) was a struggle, but for a few weeks she managed to balance the scales to spend more time with her husband.

On June 30, during a training ride near Myrtle Beach, S.C., with David as the lead bike, a slight rise in the pavement changed Linda’s life.

“When you ride, it’s like a NASCAR race,” David said, noting that bicylers are travelling single file at a high rate of speed. “When the front bike notices an obstacle, he calls back or uses hand signals to alert the others.”

On this ride, David noticed the blacktop fusing to an oncoming concrete bridge created a slight bump, so he turned and yelled to alert his partner to the obstacle.

Linda didn’t get the message.

Even though she was wearing protective headgear, the impact of the ensuing crash into the asphalt left Linda limp and seemingly lifeless.

“I’ve been with a few people who have crashed and its a sound you never forget,” David said, his voice altered by emotion.

Linda’s accident caused her to suffer a traumatic brain injury that forced ER doctors at Myrtle Beach Hospital to place her in a medically induced coma to alter bloodflow and prevent further swelling.

She spent the next six days in intensive care.

The day following the accident, July 1, as David worried his wife might die or wake up and not remember who he was, doctors approached him with more bad news.

The pressure in Linda’s brain would likely create irreversable damage unless alleviated with an intraventricular catheter, or skull catheter, which would require drilling a hole into Linda’s head.

A pressure monitor was connected to her skull and David was given a layman’s explanation of its readings.

“They said the number (on the monitor screen) needs to stay below 25,” he said, noting he spent hours staring at the digital readouts, panicking each of the many times the number neared its maximum.

As he told the next part of the story, David struggled for words as emotions took control.

David’s parents, Saralyn and Greg Lutz, are active members of Central Christian Church in Ironton. Since the day following the accident, July 1, was a Sunday, members of the church were rallying that morning with the Lutz family in prayer for Linda’s recovery.

He’d spent hours that seemed like days living and dying with the readings on that monitor, hoping for the best but thinking the worst.

Sometime around noon, a light began to shine through the clouds. A doctor analyzed the pressure in her brain and determined it had stabilized. Linda was beginning to heal on her own. The skull catheter would not be necessary.

“My mom sent me an email later that day and told me the church was praying for us,” David recalled, still struggling to control his emotions.

Later, he thought about the timeframe when the doctor gave him the good news, which coincided exactly with the time the CCC faithful had been praying.

“A lot of small miracles have come from this,” he said. “But that one really stands out.”

Since the tragic accident, Linda’s recovery is well ahead of original projections. She struggles at times to find words to express herself, but attends speech therapy three times per week and is continually making progress.

“If you didn’t know her before the accident, you wouldn’t know she had the accident,” David said, obviously very pleased with his wife’s progress.

“We feel very blessed and touched by the outpouring of love and prayers for her. It’s been amazing.”

On Saturday, Aug. 11, David mounted his bicycle at the fourth Pelotonia (“Peloton” is a cycling term that means “group”) and, in two days, rode 180 miles to help raise research funds to stamp out cancer.

Inspired by his sister, Sarabeth, his recently departed friend, Toshie, and his loving wife, Linda, he also pedalled to help a family member’s search for a cure.

An email exchange between the relatives in August 2010, included much praise from one cousin to another.

“I wanted to send you a quick note in response to your comment about 100 percent of the donations going straight to research at the James (Cancer Hospital)—It’s true,” Amanda wrote. “I am thankful that Pelotonia is in place to make research endeavors like my own possible.”

David Lutz is one of those thousands of people.

And One Goal pushes his pedals.

Ironton resident Carolyn Reeves describes the hillside slip woes she is enduring in her backyard. She wants the adjourning property... read more