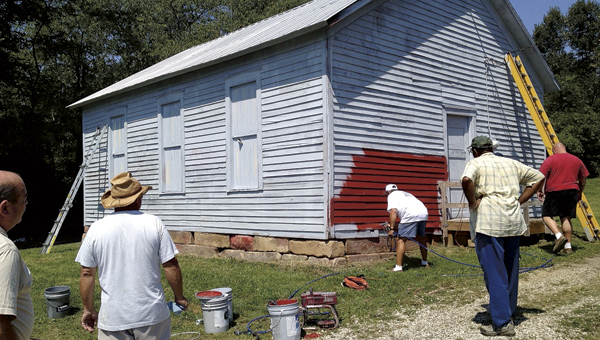 The wooden boards that sided the building were coming loose and some were missing. The red paint worn away by the elements.

Thanks to the generosity of the community and the hard work of a local civic group, the schoolhouse received a much-needed facelift last week.

The Coal Grove Lions Club spent about a week and a few hundred man hours replacing wooden siding and repainting the building, which is used by Boy Scout Troop 103, under the leadership of Scout master Marion Harrison.

Paint and primer were donated by Sherwin-Williams, a paint sprayer was provided by BC Tool Rental and a man lift was provided by R&W Rentals and Supplies. The Dawson-Bryant Local School District, which owns the building, also donated to the project.

The scouts have used the schoolhouse since the 1950s. Last Tuesday, Scouts, Lions and other community members met at the newly painted building to hear the history of the site.

Between 1855 and 1860, the structure was built next to a townhouse, community building and platform known as Deering Grove. The area was the scene of many political rallies and camp meetings as well as the Lawrence County Fair.

Deering donated the land with the condition that it must always be used for community purposes, or it would revert back to the Deering heirs.

“What better use than for the Scouts?” Carey said.

In 1982, Carey and club president Don Malone helped repair the structure after a fire.

“The Scouts made a difference back then and shaping a lot of young lives, as it did mine when I was a kid,” Carey said. “And today, that hasn’t changed.”

Jon Ferguson, advertising executive for the Lions Club, said the Scouts help them every year with their annual pancake breakfast, and felt it was important to give back to them.

Ferguson also said they hope to raise awareness about the Scouts.

“Their numbers are dwindling,” he said. “They are worried about their club.”

And children are a major focus for the CG Lions Club, Carey said.

He said one of the main goals of the club is to encourage young people to give back to their communities, whether it be through scouting or the Dawson-Bryant-based LEO Club.

“Part of our plan for the Coal Grove Lions is to bring up the younger generation and give them a sense of civic duty,” he said.

PEDRO — A couple went out midmorning Saturday to run a few errands only to come home to find their... read more