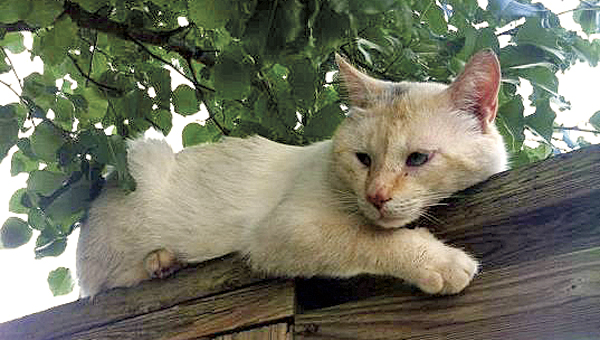 Ben showed up at Viviane Vallance’s South Ninth Street Ironton home on her 30th birthday, walking up the front walk as if he owned the place.

And in a little while that scrawny white kitten with the sapphire eyes did just that.

“There was something about him,” Vallance recalled. “You would see those blue eyes. I tried not to like him, but he warmed my heart.”

So the Vallance household gained a new member, who quickly blossomed from puny to 16 pounds.

“He was sweet,” Vallance said. “We would let him outside a lot for the day and by 4 or 5 in the afternoon, he would be in our yard and hang out in the house.”

That was the routine for Ben for the next four years of his life, until three weeks ago on a Sunday when Ironton Police came to the Vallances’ door.

“I was at the gym and my husband was home,” Vallance said. “The police showed up on our doorstep and asked if we had a cat.”

The police then took Jeff Vallance to the back of his property to show him what a passerby had seen and reported.

“Apparently someone had tortured the cat and nailed him to the top of the fence and hung him there,” Viviane said.

He was hanged with a leash apparently stolen from another animal.

“My husband called to tell me,” she said.

Viviane rushed home but couldn’t bear to see what had happened to Ben.

The couple gave the cat a resting place in their back yard, planting some lantana over the grave.

“What scares me the most is obviously the person knew we were taking care of the cat,” she said. “We don’t have a clue who did it. The only thing is that somebody knows our habits.”

The Vallances can’t think of any suspects from their neighbors.

“We live in great neighborhood,” Viviane said. “Everybody is nice.”

Right now the Vallances aren’t sure if they will get another pet but have advice for other pet owners so they won’t meet with the same heartbreak.

“They should be more vigilant,” Viviane said. “They can’t be too trusting.”

The June 29 storm that ravaged the Tri-State knocking trees down onto roads and power lines leaving hundreds stranded without... read more