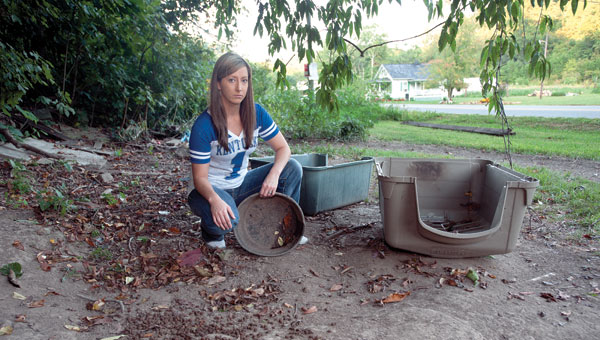 )Early Saturday morning Josie and Mike Scythes returned to their Pedro home to find their beloved dogs, Bubba and Bear, dead after having been stabbed repeatedly. Josie Scythes shows overturned food and dog house where the animals were found. (The Tribune/Jessica St. James)

PEDRO — Bubba and Bear only knew each other for about a year, but they were fast friends.

Many evenings Bear, the golden lab-basset hound mix, and Bubba, a black, tan and white Walker coon hound, would chase softballs their owners, Mike and Josie Scythes, would toss to them in their side yard off Texas Hollow.

“They were playful,” Josie said. “Both were great, wonderful dogs and wouldn’t harm anyone unless they were being harmed.”

The Scythes had owned 4-year-old Bear since he was a puppy, but had gotten Bubba from a friend just a year ago when he was 4. But both had quickly bonded and become not just pets, but a beloved part of the Scythes family.

On Saturday the Scythes got up to make a 10 a.m. appointment with their veterinarian to examine a cat the couple had rescued. With just one obligation on the horizon, the day looked as if it would unfold in a typical, uneventful way.

That is until the couple drove back to their house later that morning and a neighbor rushed up to tell them unimaginable news.

Bubba and Bear were dead. Bear lying in a pool of his own blood and Bubba huddled in a lifeless heap inside his doghouse. Both had been stabbed over and over. Both had had their throats slit.

“There were blood trails everywhere,” Josie said. “They were not just stabbed. They were brutally slaughtered.”

Even the doghouse gave little protection for Bubba. Its roof had been ripped off so the attacker could knife the coonhound another time.

“I was devastated,” she said when she saw the carnage in her yard.

Three days later one man is behind bars for the crime and the Lawrence County Sheriff’s Office is looking for his accomplice.

“This person needs to get the harshest punishment,” Josie said.

That is one of the reasons Sharp wasn’t charged with cruelty to animals, which is only a second-degree misdemeanor.

“In reading the ORC (Ohio Revised Code) the statute does cover what happened,” Sheriff Jeff Lawless said. “I felt due to the nature of the crime, it being such a violent act toward innocent animals, I needed to charge the person with the maximum the law will allow.”

“This is absolutely more than animal cruelty,” Josie said. “This is murder.”