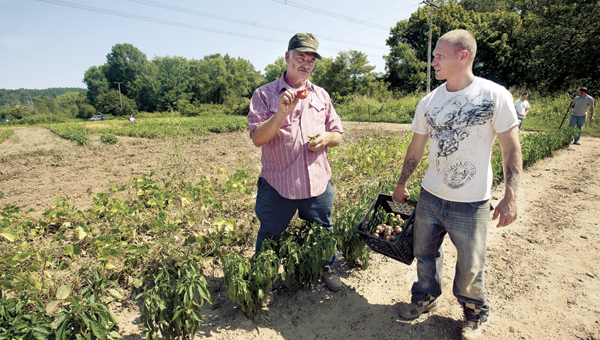 A lot of bottles of Kool-Aid and Gatorade were guzzled on those Wednesdays, but through the heat wave that scorched the area this summer a group of young people got back to their roots by tending the crops at the Lawrence County Work Farm.

Now they’re chowing down on the fruits of their labor while getting something rare in their world: A pat on the back.

“Some of these children haven’t hoed corn,” Brett Looney, director of the county juvenile center, said. “They have never stayed to see crops grown and shuck and eat the corn. This is the Appalachia they need to get back to.”

Every Wednesday for four to five hours residents of the juvenile center weeded 12 acres of corn, beans, melons, potatoes, broccoli and cucumbers on the farm that was started this spring as an experiment.

In April the county took over acreage on the banks of the Ohio River in Hanging Rock, to turn it into a place for certain inmates and those in the work-release program to work during the day and return to their homes at night, instead of serving their time in the county jail.

The impetus came when organizers saw the success of the same concept in Greenup County, Ky., started by that county’s circuit court system.

The goals are to reduce overcrowding at the jail and cut food costs at those county facilities.

“It is going to be an incredible savings to the county’s food budget,” Looney said. “On a normal year we are hovering at a budget of $35,000 a year. This will have a significant impact on that.”

In August the total pounds of produce pulled from the farm totaled 13,717. The market value for that amount translates to $17,753. An abundance of money the county doesn’t have to buy in food for its facilities.

“We are right at seven tons of produce harvested and are still growing strong,” Rick Strunk, field foreman, said. “There are still lots of green beans, tomatoes, cantaloupes out there.”

Ohio University Southern donated vans to transport the workers; Cooks Farm Center donated seeds and plants; and Weber’s Florist gave 300 tomato plants. The county farm in Kentucky sent more than 3,000 plants and Hamilton Township Fire Department came down twice to the farm to water the fields during the drought.

On top of that Dan Palmer of the solid waste district throws his accolades to Strunk.

“I give him the credit,” Palmer said. “This is a first-year project and we were hoping we would be somewhat successful. This is all attributable to him. He has surpassed all of our hopes and thoughts. And we did not farm the full 49 acres. Just think to next year to anticipate the growth.”

Statistics may sound impressive, but the one-on-one interaction between those running the farm and those young people helping to tend it can’t be measured, Looney said.

“The staff has been incredible mentors to these kids,” he said. “These kids need to have adults impressed with them. It is good to have a positive stroke on the back. There is nothing like the soil to be able to produce something like that.”

The wife of the former treasurer of the Ironton National Little League accepted her punishment for stealing more than $22,000... read more