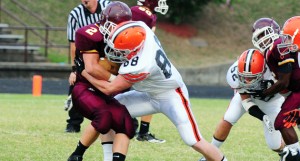 This isn’t a first-grade reading lesson. This is a lesson to opposing defenses when they work up a game plan for the Ironton Fighting Tigers.

Patrick Lewis took the Russell Red Devils’ defense to school on Friday as he ran 12 times for 245 yards and three touchdowns to go with a 68-yard punt return for another score in Ironton’s 47-21 rout of the Red Devils.

“We started slow, but then we played awesome. Nothing is possible without the offensive line,” said Lewis.

Ironton amassed 518 yards on the ground as Trevor White added 107 yards on 13 carries and quarterback Tanner Dutey had 87 yards rushing on eight carries and was 3 of 3 passing for 37 more yards.

Fullback Tanner Schweickart — who left the game in the second half due to the heat and humidity — finished with 54 yards on eight attempts.

Ironton head coach Mark Vass had a lot of praise for his team, especially Lewis.

“Patrick is a talented kid, but he’s a tough kid. He’s a tough kid and plays hard. He’s not a finesse kid. He can break a tackle,” said Vass.

Ironton (2-0) did most of its damage with its traditional T-formation, but the offense utilized its spread formation including the Wildcat.

“It was part of our game plan. When we got the lead we went to it a little. We’re never going to abandon the T (formation). They were only playing five in the box against our spread. I don’t think they expected it,” said Vass.

With strong play up front from Maurice Phillips, Aaron Stephens and White, Ironton held Russell’s running game in check for the most part. The Red Devils had 161 yards with more than half of that total coming in the first half.

“Defensively it wasn’t so much an adjustment but we got a feel for (their offense),” said Vass. “Mo is versatile. He’s a big kid, but he’s an athletic kid. He had some big hits.”

After their first possession ended on downs at the Russell 36, Ironton scored on its second possession of the game when Schweickart fought his way through the Russell defense for a 7-yard scoring run and a 6-0 lead.

Russell (1-1) answered with a 70-yard, 14-play drive keyed by two big 13-yard pass completions by Lance Evans to Googie Hayes and Troy Huffine. Bryant Cathey went the final 11 yards and Patrick Saucy’s conversion kick gave Russell a 7-6 lead with 6:15 left I the half.

But Ironton came right back with a 65-yard, five-play drive that began with a 10-yard holding penalty. White bolted 26 yards with 4:54 left in the half and Ironton regained the lead at 12-7.

Russell went three-and-out and two plays later Lewis exploded on a 66-yard scoring run. White ran for the conversion and it was 20-7.

The Red Devils got within 20-14 with just 16 seconds left in the half when Huffine went 1-yard to cap a 44-yard march. Evans hit a pair of 15-yard passes to move the drive along quickly.

Ironton took the second half kickoff 67 yards in 10 plays despite two penalties that left them facing a third-and-goal at the 16. Dutey hit White with the scoring pass and it was 26-14.

The Red Devils were forced to punt and Lewis returned the kick 68 yards for the score. Jalen Schweickart’s conversion kick boosted the cushion to 33-14.

Russell drove to just inside the 10-yard line but Ironton’s defense held on downs and took over at the 11. Five plays later Lewis shook free on a 49-yard jaunt and it was 40-14.

Meyer gets win in debut

COLUMBUS (AP) — Devin Smith made the catch of his life to finally light the fuse for Urban Meyer’s shiny... read more