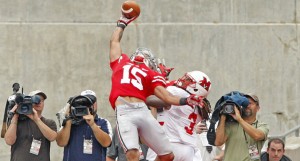 No. 18 Ohio State hosts Central Florida on Saturday in a game pitting schools who have felt the wrath of the NCAA in the past 12 months.

The Buckeyes know they won’t be going to the postseason this year, part of the penalties for a memorabilia-for-tattoos scandal. The Knights are also scheduled to sit out the bowl season after UCF was linked to runners for sports agents and found to have given money to recruits.

UCF is appealing the bowl ban, so that could change.

Based on the meager sampling of their season openers, the Buckeyes and Knights look to be postseason-quality teams. Both rolled over Ohio opponents while scoring 56 points apiece.

“We all know it’s difficult to win in major-college football,” Meyer said. “Now we’ve got one and now we get ready for next week.”

They’ll be getting ready for a UCF team that ruined former Auburn coach Terry Bowden’s Akron debut with a 56-14 victory on Thursday night.

The Knights recovered three Akron fumbles including two inside the Zips’ 10-yard line.

“The players played with great effort, made some plays and we got some turnovers,” coach George O’Leary said. “That was important. Overall, it was good effort. A lot of people played tonight, which was what we wanted to do. We were very productive in a lot of areas.”

The scary part is that both teams believe they have plenty of room for improvement.

The Buckeyes came out for the noon kickoff half asleep. They mustered just 48 yards while Dysert passed for 165 yards and had several passes — including two relatively easy touchdowns — dropped by his receivers.

After weathering three impressive Miami drives in the first period, the Buckeyes defense regrouped to permit only 147 yards in the last three quarters.

On offense, quarterback Braxton Miller completed just 1 of 7 passes for 5 yards in the opening 15 minutes, yet came alive to finish 14 of 24 for 207 yards with no interceptions and touchdown passes of 5 yards to Corey Brown and 23 yards to Devin Smith. Smith leaped high to pull down Miller’s high throw with one hand in the signature moment of the game.

Miller also stutter-stepped past a defender for a 65-yard touchdown run just 17 seconds into the second half. He finished with 161 rushing yards to set an Ohio State record for a quarterback.

“I was absolutely comfortable,” said Miller, who stumbled at times as a freshman last year as the Buckeyes went 6-7 in a tumultuous season on and off the field. “The first quarter they threw a little trick at us. We fixed it. And after that we got rolling.”

UCF’s defense led the way in the lopsided win over Akron.

Kemal Ishmael had nine tackles and a fumble recovery. The Knights also intercepted a pass.

“Getting those turnovers was huge,” said O’Leary.

Meyer, who won two national titles in his six years at Florida, was pleased with the win over the RedHawks but also aware that UCF will present a bigger challenge.

Miller found Evan Spencer on a 44-yard pass play to the 1 in the final seconds of the half. Meyer called timeout and then had 230-pound running back Carlos Hyde, who rushed for 82 yards and scored twice, go off tackle. He was stopped short of the goal line.

“Ohio State should be able to knock it in from the 1,” Meyer said. “That’s bad. That’s absolutely non-negotiable. Nonsense. We’ll hit that with a sledgehammer (in practice).”

The first-ever meeting of the teams also offers UCF a chance to show what it can do on a national stage, since the Knights won’t be able to in the postseason.

“We look forward to the opportunity,” O’Leary said. “We’ll have to play our ‘A’ game.”

Votto unsure about future of his rehab