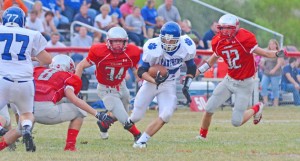 Symmes Valley defenders Derek Smith (8), Jacob Graybeal (32) and Alec Herrell (34) close in to make the stop of a Southeastern Panthers’ running back during last week’s game. The Vikings — who routed Southeastern 67-32 — play at home Friday against Chesapeake. (Courtesy of Robert Stevens of The Gold Studio in Ironton)

It’s that time of the season.

It’s week three of the high school football season and the Chesapeake Panthers and Symmes Valley Vikings are ready to renew their annual rivalry.

Although the records show the Panthers at 0-2 and the Vikings 2-0, it doesn’t matter when these two teams collide in the “Backyard Brawl.”

The Panthers lost to Oak Hill 33-7 in week one and then fell 58-12 to West Virginia Class AA defending state champion Wayne last week.

Vikings’ coach Rusty Webb is looking past the numbers and the losses.

“I know it might sound strange, but they really did move the ball against Wayne. They looked a lot better last week than they did against Oak Hill,” said Webb.

Chesapeake won last season 20-3 although the Vikings led 3-0 at the half and missed on several scoring opportunities.

Coach Andy Clark knows his team must continue to improve to have a chance against the Vikings.

“Our kids know it’s not going to be easy. They know it will be a close game just like it has been in past years,” said Clark. “Our kids know they can play better and they have to against Symmes Valley.”

“They give you a lot more formations on offense and they mix it up, but they still run the ball well,” said Webb. “Defensively they still do the same things. They’re still aggressive and run to the ball well.”

“We have to play defense. They aren’t going to change much. They’re pretty good offensively. They run power and some option and we have to stop that,” said Clark.

“We need to run the ball and keep it out of their hands. We’ve improved offensively, but we have to continue to improve.”

Webb said the Panthers will be a challenge for the Vikings despite their record.

“They play hard and they’re well-coached. They’re going to come after us. We can’t afford to turn the ball over and give them any extra opportunities,” said Webb.

Friday’s contest will be a home game for the Panthers but it will be played at Symmes Valley due to the continuing construction of the new Chesapeake football field.

Jim Walker jim.walker@irontontribune.com Coal Grove at Lucasville Valley The Hornets must put last week behind them and move forward to... read more