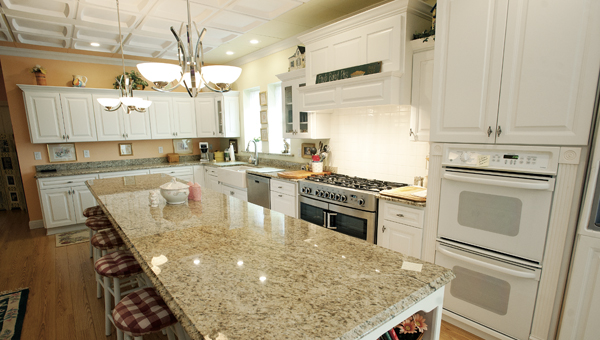 A kitchen located inside a condo at the Carver-Freeman Professional Building located on site of the old South Point Elementary School.

SOUTH POINT — Developers are planning an open house for the Carver-Freeman Professional Building, at the former South Point Elementary School. Meanwhile, the village council, which granted a zoning permit for the redevelopment of the property, will hear an appeal to that permit at a zoning board meeting later this month.

Terry Allen, secretary for White Caps LLC, the developers’ company, said the point of the Sunday, Sept. 16 open house is to show potential tenants the plans for the building. Allen said developers Joe Freeman and Brad Carver hope the building will be a mixture of office space and luxury condominiums.

The Carver-Freeman Professional Building will host an open house to view the business offices or the private condos on Sept. 16 from 1 p.m. to 3 p.m.

“He (Freeman) is building to suit (the buyer) as he sells the condos,” Allen said. “He has one condo done and furnished and he has done the outside work to the building. He’s showing everyone he’s going to do what he said he would do.”

One condo is occupied, another has been sold and developers are meeting with a potential buyer for another condo this week.

Meanwhile, South Point Mayor Ron West said the village zoning board, which is comprised of the village council, will meet at 7:30 p.m. Tuesday, Sept. 25 to hear an appeal to the permit the village granted Freeman and Carver. West said Freeman has a state work permit but not a permit to allow for occupancy.

The matter was discussed at Tuesday’s village council meeting. An appeal to the zoning permit was filed Wednesday morning by residents in that neighborhood who do not want a business or multiple-unit housing in the former school.

Allen said Freeman and Carver have signatures from 60 percent of the adjacent property owners and this allows the school property to be rezoned for the business plans.

Jail, BOE to get portion of new budget appropriation

An additional $400,000 has been added to the 2012 Lawrence County budget and already more than half of it has... read more