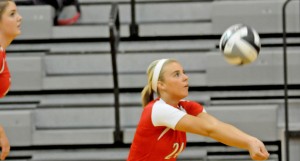 PEDRO — The way things are going with the Rock Hill volleyball team, coach Mary Ferguson may need a heart physician instead of a team doctor.

The Redwomen won their third come-from-behind match in four games this season as they rallied past the Fairland Lady Dragons in give sets on Thursday in an Ohio Valley Conference game.

“It was a team effort. It’s great to see that they have a lot of heart and determination. They’re just determined to win.”

In the win over Fairland the Redwomen got 12 kills and 6 blocks from Tommi Butler while Mei Ueda had 6 kills and 2 blocks.

Brooke Hanshaw had 10 kills, Maddie Malone 9 kills and Katie Johnson had 4 11 kills and 4 blocks in the win over the Lady Raiders.

Rock Hill got a pair of wins last week.

The Redwomen hosts Coal Grove on Tuesday and visit South Point on Thursday next week. Both are OVC games.