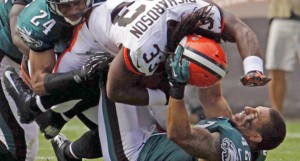 Cleveland Browns running back Trent Richardson knocks the helmet off Kurt Coleman of the Philadelphia Eagles as he is taken down by Coleman and Nnamdi Asomugha during the second quarter at Cleveland Browns Stadium Sunday in Cleveland. The Eagles defeated the Browns, 17-16. (MCT Direct Photo)

CLEVELAND (AP) — Brandon Weeden ducked for cover before the Eagles even rushed him.

Weeden threw four interceptions in a rough NFL debut for the rookie quarterback, and Cleveland’s defense couldn’t stop Michael Vick on a final touchdown drive in the fourth quarter as Philadelphia rallied for a 17-16 win on Sunday, handing the Browns their 13th loss in 14 season openers since 1999.

Vick’s 4-yard TD pass to tight end Clay Harbor with 1:18 left dashed the hopes of the Browns, who opened the year with low expectations and a roster with 15 rookies. But for nearly 59 minutes, Cleveland had a Super Bowl contender in major trouble before Vick rescued his teammates from an embarrassing loss.

Weeden’s day started on a comical note as he got trapped under a 100-yard-long flag being unfurled across the field for the national anthem. As he was warming up, the colossal U.S. flag was carried out, and before he knew what had happened, Weeden found himself scrambling on the ground.

“I was expecting to get a little warning,” Weeden said. “I was playing catch. I always stand on the 35 or 40-yard line. Next thing I know there’s about a 100-yard flag over the top of me. I sat on my hands and knees and kind of waited — me and one of the equipment managers. I looked at him and said, ‘this (stinks).’ “

The rest of his day didn’t go much better.

Weeden finished 12 of 35 for 118 yards, had the four picks and forced several throws. He was never able to get into a rhythm and was victimized by at least a few drops.

“I take a lot of pride in playing better than that,” Weeden said. “Our defense gave us every chance to win and offensively, myself included, took away from that. I’m down right now.”

Trailing 16-10, Vick marched the Eagles 91 yards for the go-ahead score on his career-high 56th pass. Before that, the superstar played poorly and showed major rustiness after getting just 12 snaps during the exhibition season because of injuries.

But when it mattered most, Vick came through, and the Eagles, who hurt themselves with five turnovers and 12 penalties, prevailed.

One play before his TD pass to Harbor, Vick underthrew Jeremy Maclin and was nearly intercepted by Browns rookie linebacker L.J. Fort, who let the ball and game slip through his hands.

“He threw it right to me,” said Fort, who picked Vick off in the first half. “I should have made that play, definitely.”

The Browns had one last chance, but Weeden’s pass over the middle for Mohamed Massaquoi was intercepted by Kurt Coleman with 1:05 remaining.

A day that promised hope with a new quarterback, new running back and soon-to-be new owner, turned into another day of heartache for Cleveland. Jimmy Haslam III, who recently bought the Browns for $1 billion, got his first taste of what Cleveland fans have been feeling for most of the past decade.

Cleveland went ahead 16-10 in the fourth after Browns linebacker D’Qwell Jackson returned Vick’s fourth pick 27 yards for a touchdown. But even though the Browns had the lead, there was still plenty of time for Vick.

“It didn’t matter what we did for three quarters,” Jackson said. “We had to stop them to win the game. We were on the field to win it and we lost.”

On the winning drive, the Eagles converted a fourth-and-1 after Vick scrambled for 9 and fumbled on third down. He recovered, but Browns coach Pat Shurmur threw his red challenge flag and asked the replacement officials to review the play.

However, referee Ken Roan discussed the play with the booth and announced it was “not challengeable.”

“I know it was a fumble,” Shurmur insisted. “I saw us with the ball. So that’s why I challenged it.”

Browns rookie running back Trent Richardson had 19 carries for 39 yards. The No. 3 overall pick in this year’s draft returned to practice this week after undergoing knee surgery on Aug. 9. He announced his arrival in the second quarter with a punishing inside run that would make Hall of Famer Earl Campbell proud.

Richardson went 9 yards before lowering his head and blasting Coleman, whose helmet went flying several yards. After the Browns punted, Coleman spent several minutes being tended to on the bench by trainers, who worked on his face.

Coleman had cuts on the bridge of his nose, upper lip and a swollen lower lip.

Notes: The Browns are just the third team since 1970 to start a rookie QB, RB and WR. Houston (2002) and New Orleans (1971) are the others. … Browns CB Sheldon Brown left with a shoulder injury in the first quarter and didn’t return. … Browns LB Scott Fujita didn’t dress despite the three-game suspension for his role in the Saints’ bounty scandal being temporarily lifted. Fujita doesn’t know what to expect next. “This is completely unchartered territory,” he said. “There’s no precedent. I felt good about it all along. Everyone thought I was crazy for feeling optimistic, but I still feel good about what’s ahead, even though I don’t know what’s ahead.”