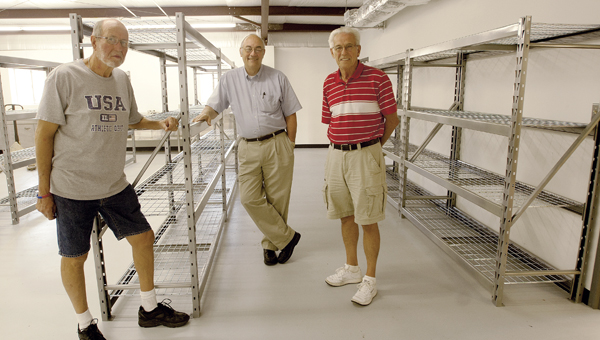 Dave Frazer, food pantry director, Dr. Wayne Young, pastor, and Cecil Cline, director of trustees and head of construction of the new First United Methodist Church food pantry stand in the stocking room surrounded by empty shelving Friday morning. There is an open house to celebrate the opening of the food pantry today after the morning worship service. (

Today after the regular morning worship service, members of First United Methodist Church will dedicate a new building that has been two years in the making.

The food pantry, which has been housed in the First Methodist basement since the 1990s will move to a new home at the corner of Railroad and South Sixth streets. It will also get a new name: Harvest for the Hungry.

September is National Hunger Month. But for literally thousands of Lawrence Countians, every month is hunger month.

The statistics are grim: Lawrence County Job And Family Services Director Gene Myers said his agency provides $1.7 million annually in the form of what is commonly called the food stamp program to Lawrence County households.

Why so much money for a county with a population of roughly 61,000?

Myers said 2009 U.S. Census statistics show nearly 20 percent of Lawrence County residents live at or below the federal poverty line and 32 percent receive some form of assistance from his office. (Federal Health and Human Services guidelines have set the poverty line at $14, 700 for a family of two and $22,350 for a family of four).

Thirty-two percent of all Lawrence County children are being raised in households at or below the poverty line. The average per capita income for Lawrence County is $19,203 — nearly $10,000 lower than for the state as a whole. When these families at the bottom of the economic ladder run out of food, they often turn to local food pantries for help.

Those in need must pickup a referral from either the Ironton Lawrence County Community Action Organization or the JFS to access either the Methodist food pantry or the food pantry at the Church of Christ at 10th and Vine streets.

Jim Malone, CAO community service block grant coordinator, said in 2009 his agency issued 500 referrals for food assistance. Each referral represents a household, be it three people or 10 people in that household. By 2011 the number of referrals had jumped 30 percent.

“We’re seeing a significant increase in the number of people utilizing this valuable service,” Malone said. “And more and more, we are seeing first-time users.”

These figures do not include people who ask for assistance at the Chesapeake Community Center or the Ironton City Mission or any of the other churches in Lawrence County that have their own food pantry.

Working on the problem

For now, the pantry will be open the same hours as it is now: 9 to 11 a.m. Mondays and Wednesdays. In the future, Young said he hopes to expand the hours and the offerings to include frozen foods and fresh items. And for the first time ever, the pantry, which is also supported by other area churches, will have a paid director.

Each year, First Methodist has a Harvest for the Hungry campaign. Young said the goal is to raise enough money to support the food bank for two years — $120,000.

“Our goal is that high because we hope in two years, the director can find corporate sponsors and endowments and be self-sufficient after that,” Young explained.

Young said another goal of the food pantry is to provide not only food for the physically hungry but food for those who are spiritually hungry as well. He hopes ministers from other churches will join together and help staff the food pantry, take prayer requests and pray with people who need help.

The church is looking for volunteers to staff the food pantry. Anyone interested may call the church at 532-1196.

Saturday event focuses on help for the ill, families

South Point woman honored for her service to the sick in the community   SOUTH POINT — The lap throws... read more