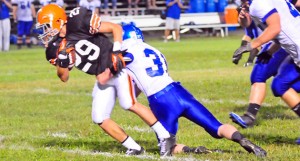 Ironton Fighting Tigers’ end Brandon Wilson (29) drags a Gallipolis defensive back after making a catch for a 10-yard gain and a first down during Friday’s game. Ironton held off the Blue Devils, 14-13. (Tony Shotsky of Southern Ohio Sports Photos)

Legendary coach Vince Lombardi loved to tell his players, “When the going gets tough, the tough get going.”

Lombardi’s word echoed throughout the Ironton locker room at halftime on Friday when the Fighting Tigers found themselves trailing 7-0.

Ironton came out the third quarter and scored twice and then needed a big defensive play on a two-point conversion to hold off the Gallipolis Blue Devils 14-13.

“We told them they have to come ready to play every Friday. Instead we came out flat and back on our heals,” said Ironton coach Mark Vass.

“But I was proud of the way we fought back in the second half. We made a few adjustments, but for the most part we just gutted it out.”

The Fighting Tigers came out the second half and went 65 yards in eight plays with Patrick Lewis scoring on a 5-yard run with 9:14 on the clock. Jalen Schweickart kicked the conversion to tie the game.

After an exchange of possessions, the Blue Devils punted and Lewis returned the kick 60 yards for a touchdown. Schweickart’s kick put Ironton up 14-7 with 53 seconds on the clock.

Neither team threatened the rest of the game and a big hit by Ironton defensive end Aaron Stephens on third down dropped Gallipolis quarterback Wade Jarrell for a 4-yard loss set up the pivotal fourth down.

Jarrell was hurried and threw an incompletion and Ironton had the ball at its own 48 with 2:16 left.

Ironton began to run out the clock, but two plays later the Blue Devils recovered the fumble to set up the thrilling finish.

Jarrell hit Nick Clagg with back-to-back passes covering 22 and 17 yards to the Ironton 13. On fourth and 3 at the 6, Jarrell scrambled back and forth until he finally spotted Clagg running across the back of the end zone and hit him for the touchdown with 30 seconds left.

The Blue Devils opted to go for the win, but Jarrell was pressured and threw and incomplete pass in the middle of the end zone.

Ironton recovered the onside kickoff, took a knee and the game ended.

Gallipolis (1-2) took the opening kickoff and drove to the Ironton 14 but was held on downs and Dylan Saunders missed a 33-yard field goal attempt that hit the left upright and bounced back onto the field.

After a three-and-out by Ironton, Ty Warnimont ran 59 yards to the Ironton 3 and Logan Allison scored on the next play. Saunders’ kick made it 7-0 with 1:51 on the clock.

Ironton (3-0) got to the Gallipolis 18 in the second quarter, but Brian Williams sacked Ironton quarterback Tanner Dutey on two straight plays and the drive stalled.

“They were very aggressive. We knew they would have everybody in the box, we just had to toughen up,” said Vass.

Gallipolis finished with 300 yards of offense with 196 on the ground and 104 through the air. The Blue Devils had 19 first downs to just seven for Ironton.